28 May Leave The Lights On by Egan Hughes 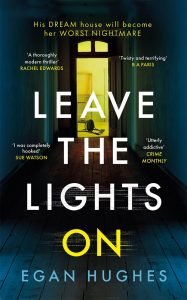 A dream house becomes a nightmare…

I’m so pleased to be taking part in this blogtour for Egan Hughe’s enthralling novel Leave The Lights On – like Dylan, the young teenager in this story, I like nothing better than a creepy tale, even though they always scare the pants of me!

The story opens with narrator Lauren, an animal portrait painter, settling into her new home with husband Joe. It’s an isolated old cottage – but there are no creaking doors and moaning chimneys here. Joe and his business partner Nicole have created the ultimate smart home, with doors that swing open, windows that darken and lighten, music that plays through rooms and boiling water on tap, all at the touch of a remote control.

But are the couple controlling their home – or is the house controlling them? Whenever Lauren is alone, things go wrong – music comes on by itself, playing distortedly, windows that she darkened suddenly lighten – and worse, she sees a face at them, of a man she knows is dead, a man who once tormented her! Has he come back to haunt her?

With a history of depression and paranoia, Lauren finds it hard to convince anyone what is happening.

Even Joe doesn’t believe her when she tells him what is going on. And as things escalate, she has to rely on her own wits to save herself from deadly danger …

Oh my! This story has everything! Right from the beginning there is a chill air of menace, with black crows cawing in the wood, a curmudgeonly neighbour, Mitchell, hanging about in a threatening manner, and even a sly reference to Lauren as Morticia, a nickname casually tossed out by Joe giving a hint of what is to come.

In a well-paced narrative, the author keeps the tension high, with strange whispering in the trees, disembodied voices calling out at night, surveillance cameras giving glimpses of things that are not there.

Lauren’s unease, fear and paranoia are immediately contagious – like her, you feel under threat, wondering if the house really does have a mind of its own.

And yet, there is plenty to make you wonder if there is a human element at play here. There are certainly people in the supporting cast of characters who might have the technical skills to scare Lauren – there’s Joe himself; Nicole, who helped with the installation of the smart home features; Joe’s 13-year-old son Dylan, an autistic computer geek who has already been in trouble for hacking his school’s IT system.

Then there is “anorak man” one of a group invited on a tour of the smart home. His behaviour is suspicious, as is Mitchell’s, the creepy neighbour.

Or could Lauren’s estranged brother be pushing her buttons from the other side of the world? Anything’s possible in this high-tech age.

And finally, of course, we can’t dismiss Lauren herself. Maybe she is a victim of her own delusions and paranoia, brought on by the problems in her past?

As the narrative moves on to Hallowe’en, all these clues and red herrings keep us intrigued and engrossed – what or who is continuing to threaten Lauren? And why?

Just as you think you can’t be more scared, the pace changes but the tension stays high. And like Lauren, you’ll leave the lights on – not just because you’re scared, but to keep reading to the story’s final satisfactory reveal.

Leave The Lights on is published by Sphere in paperback and e-book, RRP £8.99 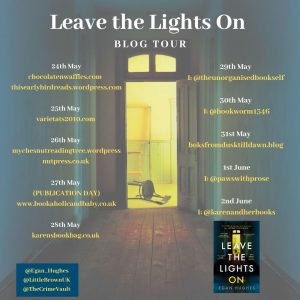 Leave The Lights On is Egan Hughes second novel, following the critical success of her debut novel The One That Got Away. Find her on Facebook @EganHughesWriter and follow her on Twitter @Egan_Hughes

The Therapist by B.A. Paris

Through The Wall by Caroline Corcoran