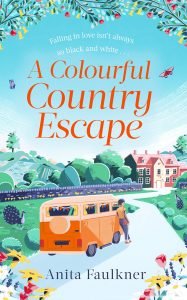 Vibrant heroine Lexie will make a splash on your heart

It’s my turn on the blogtour for this contemporary women’s romance by debut author Anita Faulkner, and I’m stepping into a vintage campervan with heroine Lexie Summers as she makes the transition from town to country in an effort to flee from all the catastrophes in her life!

Hapless Lexie has had a series of jobs and relationships but is now looking forward to a settled life with boyfriend Drew – until the day she spots him in a jewellery shop, picking out rings with toff totty Tabby, his rich snobby mother’s choice of future wife for him!

Drew’s betrayal not only breaks Lexie’s heart – it reinforces her belief that she’ll never be good enough for anyone. Her impoverished background made her a target for teasing in her school years, now Drew further proves that there’s a divide between rich and poor that Lexie can’t bridge.

From now on she’ll steer clear of rich people.

But then Lexie’s need for employment takes her to imposing Nutgrass Hall, and a job as social media manager for a paint production plant owned and run by Ben Carrington.

In a series of events that sees her living in the hall, Lexie feels she has stepped out of poverty and into a fairytale. But wealth still makes her feel inadequate, Ben is a prickly employer, and his mother Mrs Carrington-Noble makes it clear to Lexie that, just like Drew’s mother, she is determined that her son will marry well.

Lexie doesn’t care – as far as she is concerned, Ben is a washed-out beige man who needs splashed with colour. There’s no chance of a relationship between them … in fact, she’s willing to help his snooty mum find Ben a life partner from the series of posh girls paraded in front of him.

Until the day he shows her his true colours and she realises there is nothing beige about him!

This was such a fun and vibrant read. Lexie is a brilliant character, with just enough flaws to make her endearing. There’s a bit of a mystery about her in her past relationship with a tattooist called Inky – the outcome of which Lexie is terrified of people finding out – and she can be a bit quick to judge people, but she is fun, loving and compassionate and you can’t help but love her back, right from the start.

Ben’s the perfect foil for Lexie’s ditsy charm … if only she could see him as anything other than a posh toff kowtowing to his mother.

Along with the romance, there is plenty other interest in the story, not least Lexie’s development as she uncovers hidden talents that show her she can be a winner in life. Will our heroine with her “hair full of wild dye, pockets full of nothing” finally find her niche?

The story also holds a kaleidoscope of added colour in Lexie’s mix of family and friends. There’s Sky, her sister – even more feckless than Lexie once was, she’s living in a commune as one of several wives to its bearded leader; there’s Grace, one of the posh girls who’s determined to show Lexie she’s just as good as anyone, and that opposites can attract; Ben’s brother Cory who couldn’t be more different to him; and last but not least, Mrs Moon the housekeeper and Tom the gardener, who have to keep the peace at Nutgrass Hall as Ben’s mother flits in and out causing more havoc than the screeching peacocks who inhabit the courtyard!

A Colourful Country Escape lives up to its promise. It’s a colourful, fun, laugh-out-loud read with lovely characters, a pacy plot and a will-they-won’t-they romance that adds extra vibrancy to every joyful page.

A Colourful Country Escape is published by Sphere in paperback and e-book, RRP £7.99 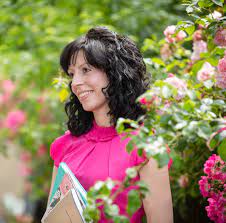 ANITA FAULKNER writes warm and fuzzy romcoms from her upcycled bureau in the south west of England. She grew up sniffing books and devouring stories. And she insists it was perfectly normal to squirrel boxes of pretty stationary that felt far too magical to actually use. She’s accumulated a brave and patient husband and a strong-willed little boy who brighten up her world. 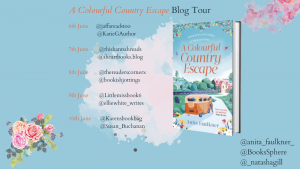