24 Mar A Conspiracy of Bones by Kathy Reichs

Posted at 11:52 in Crime by Karen Byrom 2 Comments 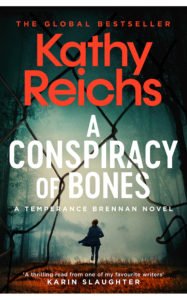 It takes more than a small thing like brain surgery and an aneurysm to keep forensic anthropologist Temperance Brennan down! Supposed to be recovering, she is soon caught up in another case, this one involving the corpse of a deceased man, partially eaten by feral hogs. Ugh!

Unable to be hands on due to the machinations of new lab head Dr Margot “Morgue” Heavner, Tempe turns to her old friend ex-homicide investigator Sliddell to help her with her investigations. Together, the two embark on a dangerous quest to discover who the man was, why he might have been trying to contact Tempe, and just why he has turned up dead.

It soon becomes clear a terrible crime has been committed – but is it the murder of the victim or something worse? Tempe suspects the latter, when the names of children who have been missing for years begin to crop up.

In solving this current mystery, can she bring resolution to grieving families who long for news of their children? Or will the evil lurking in the shadows catch up with her first?

This is a very dark and twisted story, and I have to confess it took all my powers of concentration to follow the plot as Tempe and Sliddell dived into the world of the dark web. There’s a lot of computer terminology going on and in the end, like Sliddell, I just had to shrug my shoulders and accept what I was being told.

However, the suspense, drama, tension and danger, and the need to know what had happened held me in thrall. I was further kept on track by the dry humour and wry sarcasm that enlivened the pages. Tempe’s elderly whizz-kid-computer mum Daisy’s welcome appearances lighten the story when it is in danger of getting too bogged down in technicalities, and Tempe and Sliddell spark off each other, as always.

It’s great to see Tempe back on such fine form. Despite a catastrophic event that threatens to derail the whole investigation, and the constant threat of her own mortality, she remains determined to see justice for others in this dark and thrilling story.