05 Nov A Kiss From Mr Fitzgerald by Natasha Lester 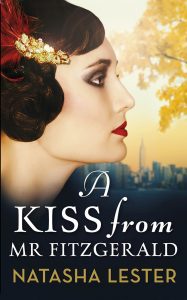 Enter the roaring twenties with a heroine who wants more from life than glitz and glamour!

Hemlines and hairstyles may be getting shorter, but for young Evie Lockhart, the days drag out longer and life is stiflingly dull in 1920s’ Concord, Massachusetts. She knows there is a whole world out there waiting for her – if only her aspirational parents and stuffy sister Violet would let her run free. But even jazz music is banned in their household – Evie is expected to behave with decorum and grace, snaffle herself a good husband from a society family and settle down to domesticity.

As for going to university? Well, it’s out of the question. Even Evie’s childhood friend and confidant Charlie Whitman thinks that’s a hoot. But then he has ulterior motives – he wants to bag Evie as a trophy wife, and her parents are all for it.

Evie’s not sure what to do – until a tragic incident shakes her into a new determination to follow her dreams and forge her own path in life. She’s out walking with Charlie when they come across a young woman by the river, giving birth alone. Not knowing what to do, Evie sends a reluctant Charlie to fetch her doctor father, who grudgingly delivers the child. But the mother dies.

Appalled by her menfolks’ callous disregard for the young mother and her child, Evie vows there and then that she’ll find some way to train as an obstetrician. Aided and abetted by Charlie’s older brother Tommy and his mother, Mrs Whitman, she leaves for New York, where she applies herself to her studies in order to qualify for medical school.

And when her appalled parents cut off her allowance, she funds her studies herself by taking a job as a dancer at the world-famous Ziegfeld Follies!

What an audacious contrast author Natasha Lester gives us in this enthralling story of a woman who’s at the forefront of feminism, albeit unwittingly, long before the concept was even dreamt of.

Evie is such a convincing character. Focused as she is on her dream of helping her fellow women, she’s no boring plaster saint with a one-track mind. She loves fun, fashion, and friendship, and isn’t averse to romance. Indeed, she’s often wondered whether a kiss from a true love would equal the thrill of reading about kisses exchanged between the heroes and heroines of author F Scott Fitzgerald’s books. Though Charlie proved a sad disappointment, his older brother Tommy is good-looking, charming and empathetic. Maybe it’s a good thing he’s sent to England by his family … Evie needs to concentrate on her studies.

As the weeks and months go by, Evie finds her way between her two very different worlds. At the hospital she’s scorned and belittled by the male doctors and students, given the worst tasks and the hopeless cases. But she never gives up. Then in the evening, she puts on her costume, feathers and a smile to dazzle men just like them with her saucy performances on stage. But she never gives in.

Though it seems a dichotomy , the Evie of the hospital and the Evie of the stage are both the real Evie – now that she is making her own choices, she has the happy knack of accepting and enjoying both sides of her life. But with a disapproving society, not mention her own family, breathing heavily down her neck, can Evie really have it all? At some point, it seems, she’ll have to make a choice between ambition and love.

There’s so much interest in this story that it hardly needs the extra dimension of the mystery of the orphan child who sparked Evie’s determination to become a doctor. But it’s there in the background, one more fascinating facet of a story that takes us from the gritty, messy reality of the labour ward (where educated but careless men think they know what’s best for women) to Society balls where Mrs Vanderbilt sparkles in a dress lit with lightbulbs, to the dressing-rooms of the Ziegfeld Follies where the front of stage glamour is revealed to be ever so slightly tawdry for most of the young women involved.

Evie bucks the trend – but can she also buck the trend in her chosen field and become a respected doctor? And will that mean sacrificing true love?

This is a story that is beautifully researched and written, with wonderful descriptions of the glamorous and not-so-glamorous sides of Evie’s life. I just knew from the minute I read that Evie regarded “her embroidery hoop as a noose, ready to squeeze the life out of her” that I was going to love this story, not just for the heroine and the plot but also for the author’s wonderful way of words.

Published by Sphere in paperback, RRP £8.99

Click here to join me in a chat with Natasha herself, as she tells us about writing A Kiss From Mr Fitzgerald

Thanks to Francesca Best and LittleBrown for inviting me on this #BlogTour. You can catch up with the rest of it by following the links below 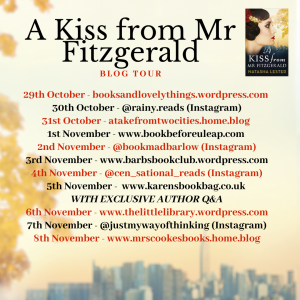