A Letter From Pearl Harbour by Anna Stuart

18 Nov A Letter From Pearl Harbour by Anna Stuart 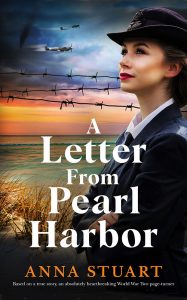 An intriguing legacy reveals secrets from the past

It’s 80 years since the bombing of Pearl Harbour – something I’ve always known about. After all, it brought the USA into World War II and gave us British a fighting chance of finally defeating Hitler and Nazism.

I’d never really considered it from the American point of view though. There they were, still a nation at peace when the attack came from out of the blue, killing military personnel and civilians alike as Japan made its bid for domination in the Pacific.

In A Letter From Pearl Harbour, Anna Stuart takes the story of the terrible events of December 7, 1941 and weaves it into the present day

Sisters Robyn and Ashleigh Harris had always known that their 100-year-old grandma, Ginny, was a pilot in WWII, who had come from Hawaii to the UK after the war. But she’d never told them the full story.

Now, after her death, she’s left them an intriguing legacy in the form of a treasure hunt that will reveal just what happened to her during the war. To solve it, they will need to go to Hawaii.

Robyn already lives and works there – a chip off the old block, she’s an aeronautical engineer. Ashleigh, meanwhile, confined to a wheelchair after a cycling accident that destroyed her legs, has lost her direction in life. Six years after the accident, she’s still bitter about her fate. Nevertheless, she joins Robyn in Hawaii, and the two set out to solve the clues Ginny has left them.

Each leads to a letter revealing more about their grandmother’s life as a young pilot training up others in Hawaii, where she’d followed her brother Jack when he joined the US air force. A story emerges of happy young people enjoying the thrills of the skies, friendship and romance on the ground.

Then the Japanese strike Pearl Harbour and everything changes. And her judgment clouded by tragedy, Ginny goes on to make a terrible mistake …

This is such an exciting story. I really liked the balance of Ginny’s past story and her granddaughter’s present quest for the truth, and how the former impacts on the latter as it becomes apparent Ginny has her reasons for revealing the truth of her past in this way.

The characters are strong, resilient and likeable – even Ashleigh, despite her despair at her situation, is a young woman you can identify with and empathise with, even if, like Robyn, at times you want to shake her out of her self-pity.

Ginny is like an old friend – she captures your heart and your imagination right from the start. We meet her as a 100-year-old woman on her deathbed, and yet her strength, confidence and courage shine through every bit as much as when she was a young woman who fought to make her own dreams of serving her country come true. She’s funny, feisty, loving and loyal, with very human flaws that make her all the more relatable to the reader.

I liked the mystery and adventure here – author Anna Stuart paints a convincing and enthralling picture of Hawaii as the peaceful oasis (despite being a military base) it was before the Pearl Harbour attack, and the terrifying scene of war it became on December 7, 1941.

Whether she’s describing Hawaii now, or 80 years ago, she gets the atmosphere spot on. Both then and now, you get the sense of its beauty and peace – which makes the Japanese invasion all the more shocking.

A super story that also gives a good insight into a part of WWII history we might not know much about,  A Letter from Pearl Harbour is a well-paced, emotional read that will surely  touch your heart.

A Letter From Pearl Harbour by Anna Stuart is available now
in paperback, ebook and Audible format