12 Oct A Witch in Time by Constance Sayers

Posted at 15:30 in Popular Fiction by Karen Byrom 0 Comments 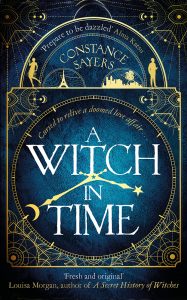 Demons, curses and a love that lasts down the centuries …

When Helen Lambert meets Luke Vamer on a blind date in 2012, things don’t turn out as she expects when he tells her he has met her before, back at the end of the nineteenth century!

Straight after their date, Helen begins to have memories of a different life as Juliet LaCompte, a peasant girl in France in 1895. Seduced by her artist neighbour, Auguste Marchant, she falls pregnant, sparking off a chain of events that involves a binding curse cast by her mother.

Her mother bungled the spell and now it seems Juliet and Auguste must pay for their sins by meeting over and over in their different lifetimes. Each time, they fail to recognise each other; each time, their love is doomed to tragedy.

Vamer himself appears in each of the heroine’s lifetimes, appointed by Juliet’s mother to look out for her daughter, but unable to prevent history repeating itself.

Neither as Juliet, nor as Nora Wheeler, a film actress in the 1930s, nor as Sandra Keane, a musician in the 1970s, was Helen able to break the curse. But with memories of her past life piling up thick and fast, might there be a chance this time? Each of her incarnations sees her character grow stronger, even as each loses the love of her life, in turn artist Auguste Marchant, film producer Billy Rapp and photographer Rick Nash. And she’s discovering her own supernatural powers, too …

In the “fucked-up version of groundhog day” that is her life, Helen accepts that she is cursed and that Luke Vamer “may or may not be the devil.” But what she is not willing to accept is that the curse cannot be broken.

The narrative’s tone varies from light to dark as everyday events segue into scenes of sorcery and evil – both of the supernatural and man-made variety. For Juliet and Nora especially suffer at the hands of cruel men.

This juxtaposition of the normal with a supernatural world where black magic reigns delivers a story that is dangerous, romantic, suspenseful and enthralling.

Suspend disbelief, go with the flow of the author’s vivid imagination and just enjoy it all. With tandem timelines and four strong – or should that be one? – main characters, each with her individual story to tell, this is a book I couldn’t put down.

A Witch In Time by Constance Sayers is published by Piatkus in paperback, RRP £8.99. Also available in e-book format