All For You by Louise Jensen

24 Jan All For You by Louise Jensen 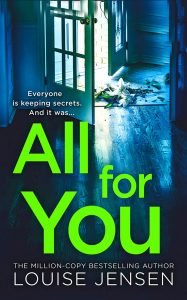 How far will a mother’s love take her?

A very tense and dramatic domestic thriller noir begins with the story of three teenage friends who go missing, one after the other. Could their disappearance by linked to a tragedy that happened the previous summer?

Told mostly through the eyes of Lucy, mother of Connor, the third boy to go missing, the story of how a teenage prank went wrong gradually unfolds in flashback.

Something awful happened to Hailey, Connor’s girlfriend – and it seems the adults around him are involved in some sort of cover-up to protect their boys.

The weight of the secret has certainly affected Lucy’s relationship with her older son, at a time when her energies need to be concentrated on her younger son Kieron, who suffers from degenerative liver disease and will soon need a transplant.

Lucy already faces losing him – she can’t bear to lose Connor, too. But just what lengths will she go to, to keep her children safe?

Along with the meticulously planned plot, the underlying theme of how far a parent will go to protect their child will resonate with readers.

It doesn’t help Lucy’s peace of mind that her husband Aidan is keeping secrets, too. In fact, no-one is telling the whole truth in a tale so full of twists that I’m surprised the pages don’t curl up on themselves!

Well-paced and redolent with menace and suspense, and a very dramatic denouement, this is one of those stories you can’t put down.