Posted at 12:25 in Historical, Wartime by Karen Byrom 0 Comments 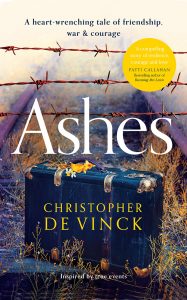 A World War II story of friendship and courage that is enthralling, enchanting and heartbreaking in equal measure

Simone Lyon is just eighteen at the start of WWII.  And while she idolises her Belgian WWI hero father, she knows she can never emulate his courage. She’s afraid of so many things – just the thought of a Nazi invasion leaves her trembling in fear.

Yet when she is called upon to show her mettle, Simone learns that she can be brave, defying friends and family in her fierce loyalty and protection of her Jewish friend, Hava.

The two girls meet just a few months before the invasion of Belgium, and bond instantly over the Red Cross bandages they’re rolling. Together they explore the sweetness of their adolescent life, enjoying picnics, arguing over the respective merits of film stars, sharing their favourite books and plays, and confiding their dreams and hopes for the future.

But will there be a future for Hava when then Germans come? Simone is determined that there will be. And so, together, the two girls set out on a hazardous journey across Europe, hoping to reach first Dunkirk, and then the safety of England.

They encounter huge danger along the way, but there are inspiring moments, too, when they’re helped along their way by the folk they meet – ordinary people like themselves who have not lost their humanity.

That’s what this story is all about – humanity, which surely will prevail over the dreadful days of war.

It’s an enthralling story! The author was inspired by his own family history, and understands only too well the horror of the Nazi invasion, and the panic and fear it caused among the Belgian people. There are harrowing scenes of death and destruction, almost too horrible to read, but amid the the chaos are oases of calm as Simone and Hava reflects on their shared friendship, and we are reminded that beauty, innocence and hope can still exist in a cruel, cruel world.

Beautiful, descriptive prose, suspense and tension all make this a gripping read, but the story would be nothing without Simone! She may be frightened, but she’s no coward. A true heroine in dreadful times, her story is deeply inspiring.

Though by its nature heartbreaking, Ashes is a must-read book,  glorious in its telling of a tale of courage, friendship and defiance in the face of war.

Published by HaperInspire on August 20 in paperback, RRP £8.99. also available in ebook and Audible format.

Christopher de Vinck is a teacher and the author of eleven books and numerous articles and essays for publications such as the Wall Street Journal and Reader’s Digest.