26 Jan Before She Disappeared by Lisa Gardner 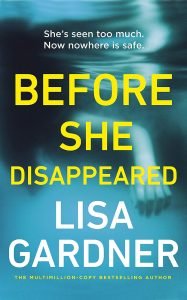 A cracking story with a chilling plot that tackles challenging issues

A new stand-alone thriller by Lisa Gardner is always a cause for celebration with me, and Before She Disappeared did not disappoint.

It introduces us to Frankie Elkin, in her own words, “a white, middle-class, recovering alcoholic” whose mission in life is to find missing people that the police have given up on.

As a lay person, Frankie can insinuate herself into the lives of the disappeared in a way denied to the authorities, and her track record is impressive – though so far all 14 of the cases she has solved have had a tragic outcome.

Driven by demons that are explained as the story progresses, she arrives in Boston to investigate the case of 15-year-old Angelique, a Haitian immigrant and model student who vanished without trace from her school some 11 months before. Is she a runaway or a kidnap victim? Is she alive or dead?

As Frankie takes a job in a bar and sets about her investigation, quizzing family, friends and teachers to build up a full picture of Angelique’s life, she comes up against the might of the Boston police in the shape of Dan Lotham who initially suspects her of being a charlatan.

But the pair form a grudging partnership – something Frankie is increasingly grateful for as she finds herself drawn into deadly danger in her efforts to locate Angelique.

This truly thrilling story introduces you to a world of drugs, gangs and forgery – with humanity at the very heart of it! Frankie’s complex, driven character will capture your sympathies immediately, while Angelique, her family and friends form fully before your eyes in descriptive prose that paints a perfect picture of the city they live in, their homes and their lives.

From Angelique’s heartbroken brother Emmanuel to dangerous gangster Deke, from laconic bar owner Stoney to the alcoholic mother of another missing girl, every character in the book is treated with respect and dignity by the author’s pen, and this, coupled with its nail-biting plot, makes this a fantastic read.

Despite its gritty theme, there’s humour here, too, with Frankie’s wry self-deprecation and her dealings with her aggressive room-mate Piper – a near feral cat whom she nearly manages to win over!

Right from the start, it is plain that Frankie needs to atone for something that happened in her past, and themes of guilt, survival and redemption add even extra depth to an already brilliant story.

With the case finally wrapped up, Frankie moves on, but hopefully we won’t have seen the last of her

Published by Century in hardback, £12.99