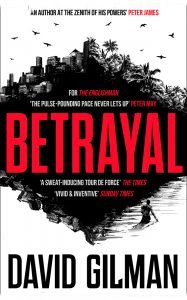 Spy thrillers are a very particular genre that I’ve only recently become acquainted with, but I find myself enjoying them more and more as I get to grips with the mechanics of the sometimes convoluted plots and narrative.

One thing they all seem to have in common is a valiant yet vulnerable hero who’ll appeal to readers of all genders, and David Gilman’s hero is no exception.

In Betrayal, we meet a secret agent who makes Ian Fleming’s hero look like comic book Beano’s biggest softy, Walter!  Dan Raglan, former soldier in the French Foreign Legion’s parachute regiment is now an “asset” on both sides of the Atlantic, called upon by MI6 and the CIA whenever there is trouble they can’t handle.

At the moment, he’s leading a quiet life in France, but when he gets a distress call from a former legionnaire, he springs into action – the Legion are family, and family look after their own.

His determination to protect his former comrades in arms, and discover the truth of what they’ve become embroiled in, takes him from the backstreets of Marseilles to the Pentagon’s corridors of power, then on to the steamy jungles of Honduras, with a quick diversion to Disneyland!

As he makes his way through the USA, incapacitating or killing all the villains who get in his way, he gradually uncovers a tale of corruption at the highest level. Can he trust anyone in the CIA or MI6?

Though haunted by the eyes of the dead, Raglan is a survivor and an avenger. Without any special gadgets – other than a trusty Harley motorbike  – he powers his way through all obstacles in his quest for truth and justice.

It’s all very bloody and violent – villians are felled swiftly and brutally. It’s no more than they deserve.

But of course Raglan has a softer side too, as evinced by his loyalty to his one-time comrades, his care for their families’ safety and his willingness to put his trust in strangers like FBI special agent Jenna Voss and Vietnamese veteran TJ Jones.

It’s what keeps you reading – that, and the author’s flowing descriptive prose and the clear, precise narrative that delivers a plot more lucid than most spy thrillers.

The threads of the story come together neatly about three-quarters of the way into the book, but there’s still plenty action ahead as Raglan continues to chase down the perpetrator of what he considers the most heinous crimes of all – the murder of innocent folk caught up in his mission.

What a hero for our times!

Betrayal by David Gilman is published by House of Zeus in hardback, RRP £16.99, and is available here 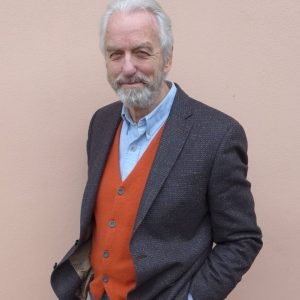 David Gilman has had an impressive variety of jobs – from firefighter to professional photographer, from soldier in the Parachute Regiment’s Reconnaissance Platoon to a Marketing Manager for an international publisher. He has countless radio, television and film credits before turning to novels. From 2000 until 2009 he was a principal writer on A Touch Of Frost and nominated for a BAFTA.

He has already written an acclaimed seven-book series set in mediaeval times, as well as two stand-alone novels.

Betrayal is the second in his new thriller series featuring Dan Raglan, a contemporary knight errant who served in French Foreign Legion. The first book in the series, The Englishman, is available here.

Thanks to Sophie Ransom and House of Zeus for inviting me on this blogtour. You can catch up with the rest of the tour through the links on the poster