04 Jun Both of You by Adele Parks 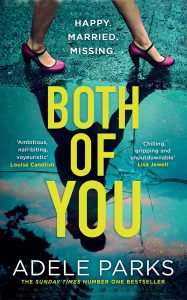 Sunday Times best-seller Adele Parks always knows how to tell a great story, so I knew I was in for a treat when I picked up her latest novel Both of You, the story of two very different women, each hiding secrets from their loved ones, who have been reported missing within days of each other.

In a shocking opening, we learn one of them, Leigh Fletcher, has been abducted, and is now chained to a radiator in an empty room, at the mercy of her unseen captor.

Just as she is reported missing by her husband, Mark, the detectives involved are called to investigate another missing woman, Kai. Can their disappearances be connected?

DI Clements has her suspicions, but with the 2020 pandemic threatening to shut down the country, her bosses can’t spare her much time or resources to look for adult women who may have chosen never to be found.

It’s hard to say much more about the ongoing plot without giving too much away, so I’ll just say this is a thoroughly gripping story from the assured pen of Adele Parks, who knows how to plumb the depths of every human emotion, bringing tension and drama into the everyday ordinary.

In a twisty narrative that offers so many possibilities, themes of lust, love, betrayal, jealousy and revenge are fully explored.

It’s an emotional as well as an exciting read, offering insight into the lives and motivations of all the main characters, while keeping you guessing about the final outcome for each devastated family of their missing wife and mother.

Mark and his sons Oli and Seb just want Leigh back safe and sound. She’s been a rock to the devastated widower and his motherless sons since she married Mark 10 years ago, building a happy, close-knit family unit while holding down a demanding job that takes her away for half the week.

Millionaire businessman Daan is no less keen to know what has happened to Kai. Married just three years, he values her strong independence and admires her devotion to her mother, whom she visits regularly at her care home up north.

Of course, the husband is always the main suspect when a woman disappears, but surely these two men can have nothing to do with Leigh or Kai’s disappearance?

With a narrative related from multiple viewpoints, readers have to take at face value the reaction of the various players to Leigh and Kai’s disappearance – but can any of them be trusted?

This story got me questioning the complexities of seemingly-straightforward relationships, even as I raced through the pages to its final, shattering conclusion.

Both of You by Adele Parks is published by HQ in hardback, RRP £14.99.
Also available as an e-book.