Posted at 18:29 in Literary Fiction by acerockcola.com 0 Comments

The book on which Jojo Rabbit is based 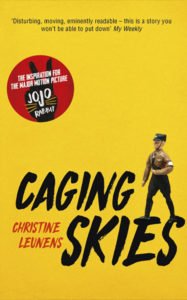 The Tattooist of Auschwitz, The Book Thief, The Boy In The Striped Pyjamas – all are brilliant books that give us a glimpse into the Jewish experience during WWII. Caging Skies is no exception – and might be the most brilliant of them all…

We are introduced to unlikely hero Johannes Betzler as a young boy in pre-WWII Germany. Only surviving child of an affluent family, his hero is Hitler. To his parents’ disapproval, he embraces the Hitler Youth Movement and longs only to serve the Fuhrer.

His dreams are shattered as surely as his body and face are ruined by a stray bomb, and teenage Johannes is confined to home, where he quickly becomes aware something strange is going on. Both mother and father are cagey, there are strange noises at night, food is going missing – and why is his mother carrying full chamberpots around the house when they have a perfectly-working bathroom?

Johannes’ investigations uncover the truth – his parents are hiding a Jewish girl, a friend of his late sister, behind a false partition in a spare bedroom.

Conflicted between duty to his parents and responsibility to his Fuhrer, and burning with adolescent feelings for Elsa, the young girl, Johannes keeps the family’s secret. He even takes over the care of Elsa when his mother and father disappear in the chaos and horror of war.

The war goes on, and Johannes does everything is his power to keep Elsa safe, hiding her presence from his ancient, bedridden Grandma, his erstwhile colleagues in the Hitler Youth and various SAS members who come snooping.

As the war draws to a long and weary close, it seems more imperative than ever to Johannes that Elsa remain hidden. For now, he is desperately in love with her. Where will it all end?

This moving story draws its power from so many levels. There is the nail-biting tension of the plot, the fear for the reader that Elsa will be discovered, with all the attendant repercussions for Johannes.

There is the atmospheric description of wartime life in Austria, where people try to carry on as normal in face of food shortages, air-raids and public hanging.

There is the elegant prose of the story, which is told with pathos, dark humour and sharp insight.

Then there are the characters. Herr and Frau Betzler, with their dignity and strength; old Frau Betzler with her wisdom and affection; Elsa with her courage – passive in her enforced imprisonment but never spiritless.

And of course there is Johannes himself. What are we to make of him? The spoilt arrogant Aryan teenager develops and grows before our eyes – but not in ways you might expect of a hero-saviour of a vulnerable young girl. Yes he is strong and courageous, but his obsessive behaviour leads us to question whether he is more captor than protector of the young girl in his care. Is Johannes himself truly free, or as much a victim of Hitler’s brainwashing as the Jewish girl forced to hide for her life?

Will either ever be truly free?

Disturbing, moving, eminently readable – this is a story you won’t be able to put down.