Call of the Penguins by Hazel Prior

19 Nov Call of the Penguins by Hazel Prior 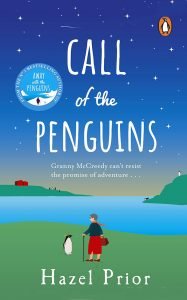 Whether or not you’ve read Away with the Penguins, last year’s runaway paperback hit, you’re going to love meeting or re-acquainting yourself with Veronica McCreedy, the doughty octogenarian whose lonely life has been transformed by a new-found passion for penguins!

She’s back from her previous adventures, which saw her track down unknown grandson Patrick, fund a penguin research facility on Locket Island in Antarctica, and discover new friendships with fellow octogenarian and environmental enthusiast, Sir Robert Saddlebow, and Patrick’s friend’s daughter, nine-year-old Daisy.

Call of the Penguins opens with Daisy, recovering from treatment from her childhood cancer, staying with Veronica at Ballahays, her Scottish home. Then a call comes from Sir Robert – he’d like Veronica to accompany him on a visit to the Falklands to film penguins for his latest wildlife programme Who Cares About Seabirds?

Veronica doesn’t have to be asked twice!

But as she and Daisy set off on their latest adventure, there’s trouble in paradise for Patrick, who has been living and working on Locket Island with his girlfriend and boss, Terry. After a quarrel, he leaves behind Terry and the penguins – including his grandmother’s beloved penguin Pip – to begin a quest for more details of his late father Enzo’s life.

With Patrick no longer working on the island, will this mean the end of Veronica’s funding for Terry’s team there?

With drama on three fronts, this is a real page-turner right from the very first page.

Fierce and unintentionally funny Veronica is a fantastic heroine for our times. She may be old, a bit deaf and sometimes a little forgetful, but she is always focussed on the important things in life.

She may assert that she values penguins over people but behind that gruff exterior beats a warm, loving heart in a woman who is prepared to go to any lengths to protect the safety and happiness of the people she loves.

Armed only with a handbag, she’s ready to take on anyone who threatens her friends, her family or her beloved penguins.

Oh, those penguins! Gentoos, Emperors, Little Penguins, Rockhoppers, and, of course the Adelies whom Pip belongs to – the author’s descriptions of their colonies, environment and individuality draw you straight in to the story. There’s survivor Pip, Scottish-homed Mac, Sooty with his stand-out plumage, and sweet little Petra.

Though the author is careful not to anthropomorphise them, they are as quirky and individual as the humans around them, and it’s wonderful to see them through little Daisy’s eyes, especially in their native environment.

Brought to vivid life by the author’s descriptive prose, Antarctica, where the sea “throws glitter and diamonds into the air” will “get into your bloodstream and mess with your senses” just as it does with Patrick’s. The Falkland Isles become a must-visit place!

But it’s the people who matter most, of course. From Veronica and Daisy to Sir Robert and Patrick, from Terry on Locket Island to housekeeper Eileen at home in Ballahays – all have instant appeal. Their strengths, their vulnerabilities, their daily challenges, hopes and dreams shine through the narrative, keeping the reader’s emotions engaged even as they’re laughing at the dialogue, or the antics of the penguins.

And while there’s a subtle message for us all in there, about our responsibility to the planet, the story never becomes preachy or heavy, though it has its share of poignant moments, for people and penguins alike.

As the different strands of the story draw together, we hope and long for a happy ending for them all.

“Remember the penguins,” Veronica is fond of saying to others, to remind them that bravery, determination and resilience are what’s needed to get you through life.

She has all this in spades, as this latest adventure shows.

I really hope there will be a third book! 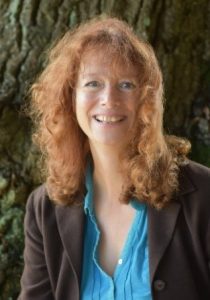 Hazel Prior lives on Exmoor. As well as writing, she works as a freelance harpist. Hazel is the author of Ellie and the Harp-Maker and Away with the Penguins, which was a #1 bestseller in ebook and audiobook, picked for the Richard & Judy Book Club and for the Radio 2 Book Club. Hazel’s debut novel, Ellie and the Harp-maker, has also been a top 100 Kindle bestseller and has sold over 20,000 copies in ebook in 2021 alone. Call of the Penguins is her third novel. 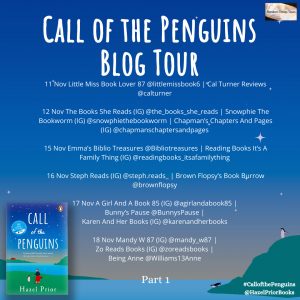 hanks to Anne Cater of Random Things Tours for inviting me on this blogtour and to the publishers Black Swan for a copy of the book in exchange for an honest review. 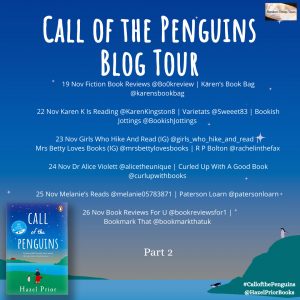 Away with the Penguins, CAll of the Penguins, Environmental issues, Fun, Hazel Prior, Penguins, Richard and Judy bookclub, Romance, Veronica McReedy
Share
Print page
1 Like