Posted at 10:13 in Historical, Popular Fiction by Karen Byrom 0 Comments 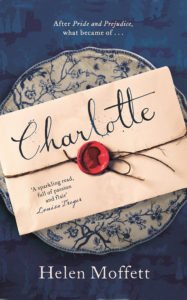 Whatever happened to Mrs Collins? The last we heard of Eliza Bennett’s best friend in Pride and Prejudice was that she was expecting “a young olive branch” with her husband, the odious, unctuous vicar who stood to inherit the Longbourne estate and put the Bennett girls out on the street when Mr Bennett was no more.

In an audacious, but confident move, author Helen Moffett picks up Charlotte’s story a few years after her marriage. Now a mother of three, she and Mr Collins still live in the shadows of Rosings, at the beck and call of Lady de Brough and her sickly daughter, Anne.

And yet … much has changed. Charlotte is happier than you’d expect her to be with her own household to run, her children to care for and a husband who is unexpectedly kind, if not clever.

Then tragedy strikes with the death of little Tom, their son. Plunged into despair, Charlotte lives out her life mechanically – until Eliza comes to the rescue with the offer of a summer at her Derbyshire estate. Will the traquillity of Pemberley heal Charlotte’s broken heart? Or will the summer’s events – and in particular one person – shatter her peace forever?

Jane Austen’s masterly penmanship opened up for us a world where women could make their own choices despite society’s constraints – even if that choice usually ended in marriage. Helen Moffett takes this one step further by endowing Charlotte with nascent feminism. Charlotte had already secured her own future by scheming to marry Mr Collins. Now, with the loss of Tom, who would have inherited Longbourne in due course, she realises she and her daughter may face a similar fate to Mrs Bennett’s, and is determined to take steps to avoid it. She finds an unlike ally in Anne de Brough, who, possessed of her own fortune, is – somewhat surprisingly given her unattractive portrayal in the original Austen story – kicking against the constraints in her own, subtle way.

As a huge fan of Pride and Prejudice, I enjoyed this book. Helen Moffet’s portrayal of early nineteenth century life for women in households rich and poor is convincing and enthralling.

While the narrative lacks the sharp wit and wisdom of Austen’s pen, it is fun – and often enlightening – to see the original story from Charlotte’s point of view as she recalls the events that changed the Bennetts’ and her own fortunes. Helen Moffett handles the character development deftly and it’s good to see old friends like Eliza, Jane and Lydia appear – and be reminded that life doesn’t stop at the altar.

Does everyone get their happy-ever-after envisaged by Jane Austen? That would be telling! You’ll have to read this book!

Published by Manilla Press – available in ebook and Audible now, and in hardback on September 2.