Posted at 11:06 in Memoir, Non-Fiction, Nostalgia by Karen Byrom 0 Comments 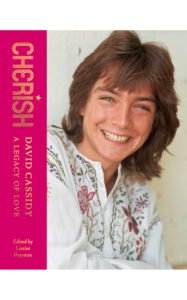 If ever there was the perfect time to indulge in a feast of nostalgic memories, it’s now, and what better way to do it than with this beautiful collection of pictures and anecdotes from the life of 70s’ teenybopper idol David Cassidy.

Catapulted to fame through his part as Keith in The Partridge Family, David Cassidy never wanted to be a teen idol – and indeed soon turned his back on it all, though he continued his musical career. In the early 2000s he delighted his fans, by then in their 40s and 50s, with a series of nostalgic tours, which is when I was privileged to meet him.

Sadly, he died in 2017, but over the years, he brought such pleasure to so many people, leaving them memories to cherish.

Now some of these memories have been brought together in over 250 full colour pages of anecdotes, photographs, poems, drawings and tributes from his friends, from people who worked with him, and, most importantly, from the fans themselves.

These heartfelt stories of chance meetings, precious keepsakes, acts of kindness and even funny phone calls make Cherish a wonderful collection to dip in and out of.

Meet Lies from the Netherlands, who has David’s face tattoed on her arm; Julie from Australia, president of his Australian fan club; Jill from the US whose epileptic son Jason was helped so much by David’s music.

There’s Connie Rose who managed to get his phone number when she was just 9 and had a conversation with him. Oh, yes, there’s me, too, meeting my idol in Glasgow in 2002! What a magical evening that was. 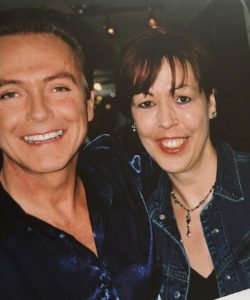 The memories are amazing, the pictures fantastic. Dipping into this book really makes me feel part of the David Cassidy family around the world. It’s an wonderful tribute to his life, music and memory from the people whose lives he touched in so many different ways.