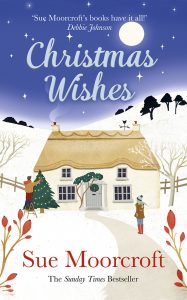 The action here actually starts in Stockholm, where Hannah Anna Goodbody runs Hannah Anna Butik. The shop is doing well, but her relationship with live-in boyfriend Albin is on the skids when Nico, an old friend of her brother Rob, turns up.

Swedish-born, he spent his formative years in Hannah’s home village of Middledip and now lives in London.

They duly meet up again at Rob’s wedding, where there is a definite spark between them – until Nico learns Hannah has a boyfriend, and turns decidedly cool.

Hannah goes back to Sweden to end the relationship only to find Albin has pre-empted her, robbing her of her business and her home. Fortunately, there’s always a place for her at Middledip, and she returns there to look after her Nana Heather, who has broken her arm.

But why is Nico now living in the village, too?

The scene is set for romance – but there are so many challenges in the way. Divorced from his drug and alcohol dependent wife, Nico cares not only for his own daughter, Josie, but her little half-sister Maria. He’s constantly juggling work with family demands and very conflicted about his feelings.

Hannah meanwhile, though not heartbroken, is smarting from Albin’s betrayal and very aware she needs to find a job and a new purpose in life.

Will the misunderstandings between her and Nico drive them apart or bring them closer together?

This is another super seasonal story from Sue Moorcroft. Both Nico and Hannah are empathetic characters – Nico especially, with his love for his daughter and her little half-sister. He’s strong, funny, caring and yet vulnerable, too (he has an eating disorder brought on by stress). No wonder Hannah falls for him.

Hannah is warm, resourceful and loving – a bit too inclined to doubt herself, epscially when it comes to matters of romance but willing to stand up for herself and those she loves in all other ways. Her and Nico’s emotional connection bubbles away under a narrative that takes us from Sweden to Middledip back to Sweden in a series of adventures and mishaps and misunderstandings as they both try to get their lives back on track.

As it’s Christmas, expect snow, carol singers, festive meals, fairylights, snowman building, skating and a celebration of Sweden’s St Lucia day before Christmas day itself, when things all come to a head for Nico and Hannah.

I can’t leave this review without mentioning the little girls, Josie and Maria. They’re both charming – bright, funny and loving, without being little angels, and Nico’s relationship with them is definitely a strong point of the book. There’s one funny scene when he hoovers off Maria’s socks where I was laughing as much as the girls! I think I might be a little in love with him myself …

Christmas Wishes is published by Avon in paperback, RRP £7.99

Sue Moorcroft is a Sunday Times best-seller of contemporary romantic fiction, who also writes delightful short stories and serials for women’s magazines. Follow her on Social Media through these channels.