Posted at 11:28 in Debut, Historical by Karen Byrom 0 Comments 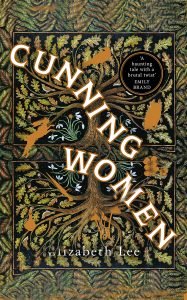 Fallen on hard times after their fisherman father drowned at sea, the Haworth family live in a tumbledown cottage on the outskirts of a village, ostracised by their neighbours who distrust Ruth Haworth, her son John and daughters Sarah and Annie.

They believe the family are witches – no surprise, when Ruth herself frequently consults her invisible familiar, a hare called Dew Springer, and Sarah is convinced her birthmark is the mark of the devil, who is just waiting to claim her.

It’s this feeling of mysterious menace always waiting around the corner that makes this story utterly engrossing! As it’s set in 1620, the whole family live in constant, real danger of being arrested and tried for witchcraft, and Sarah begs her mother to stick to providing the villagers with herbs and healing, and keep hidden the other tools of the cunning woman – enchantments, curses and spells!

Then Sarah catches the eye of farmer’s son, Daniel, a gentle, compassionate boy who faces his own daily challenges in the rough and tumble world in which he lives, remorselessly belittled and teased.

The two fall in love and hatch plans for their future – but is Daniel really Sarah’s salvation from the life she believes she is destined to lead in the service of Satan? Can she every really steer her own fate?

A slow-burning but thoroughly mesmerising read, this story brims with menace and chill as we expect the worst for the Haworth family.

But the narrative is balanced beautifully by the love story between Daniel and Sarah, who bring out the best in each other.

It’s not just the characters that draw you in. Seventeenth century country life is described with great authenticity in the descriptions of ordinary folks’ homes, work and daily life, including May Day fetes and hiring fairs. It’s fascinating to read what Sarah must wear as a milkmaid, or to imagine yourself in housekeeper Bett’s tidy little two room cottage, or indeed in the tumbledown houses abandoned by plague victims in which little Annie plays.

The story takes you through every human emotion. Fear and hatred, courage and kindness, love and hate leap from the pages, but no character is completely black or white – with the possible exception of Magistrate Wright, who is determined to root out witches and Papists and bring them to justice. Daniel’s father is harsh but loving, Sarah’s mother is sinister, but broken, farmhand Gabriel is a bully, but strangely vulnerable to love. How will they all fare as events in the village reach a tragic climax which threatens Daniel and Sarah’s future together?

For characters, plot and atmosphere, this is one of the best stories about the seventeenth century witch hunts I’ve ever read.

Cunning Women is published by Windmill in hardback, RRP £14.99