Posted at 11:40 in Best-selling Author by Karen Byrom 0 Comments 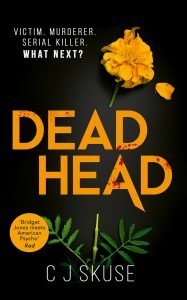 Everyone’s favourite serial killer “Sweetpea” Rhiannon Lewis is back in a third, stand-alone story. Fleeing justice, she’s left her newborn baby behind and is now all-at-sea on a cruise ship to her final destination, where she plans to change her name and appearance and leave her old life behind.

As Hilary, a ditzy Aussie girl on her way to meet her husband in Barcelona, Rhiannon can hide in plain sight – mingling with her fellow passengers and ruminating on who she’d like to kill – everyone from Instagram Influencers (does she need a reason?) to the kid who nicks the goldfish-shaped carrot garnish from the salad buffet before Rhiannon can help herself to it!

As Hilary, in a bad wig and coloured contact lenses, she makes friends on board, but old habits die hard and she can’t resist catfishing for sexual predators – and administering her own form of justice!

Rhiannon, survivor of a shocking violent crime herself, is as funny, witty, vulgar, sweary and terrifying as ever, but also strangely vulnerable as she reflects on her lost child and wonders if she’ll every find true lasting love.

There are folk on her journey who can help her – notably Caro, an older woman she meets on the cruise ship, and Tenoch, the Mexican ex-cartel member who becomes a father figure.

Rhiannon may be a mad, bad and dangerous serial killer, but she has her own moral code, and is kind, warm and loyal to those she cares for, determined to save Caro from a life of loneliness and to exact revenge for victims of rapists, child kidnappers and molesters whenever she comes across them – and believe, me, she is constantly on the lookout!

Rhiannon can save others. But can she save herself? In the end she has to draw on her own inner resources to escape the threats to her future posed not only by the dangerous men around her, but by her very own self.

Dead Head is published by HQ in paperback, RRP £8.99, and in ebook format