04 Feb Everything Is Beautiful by Eleanor Ray 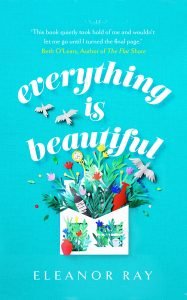 If you’re a fan of quirky heroines like Eleanor Oliphant, then you are going to love this story just as much as I did!

Thirty-something singleton Amy Ashton is a collector of beautiful things – to the extent that she cannot move around her own home for all the items she has collected. They’re in every room, the hall and landing – her staircase is almost impossible to manoeuvre and they even extend into her front and back garden. It’s a long time since she’s seen her wardrobes, fireplace or even fridge!

The collection takes up all her room – but still, there’s a space in her heart, a giant hole made by the absence of her boyfriend Tim and best friend Chantel who disappeared one fateful evening eleven years ago, never to be heard of again.

Despite all the evidence to the contrary, Amy can’t believe they betrayed her, but with all investigations leading to a dead end, she has had no choice but to carry on with her life, eschewing friendship and her once-loved art, and avoiding human contact as much as possible.

Instead she finds solace in the ephemera she collects – china birds, mirrors, cookery books, garden pots, ashtrays, empty wine bottles and, somewhat bizarrely, newspapers and plastic cigarette lighters. Her treasures are more to her than mere objects – they’re a substitute – and a symbol – for the love she has lost, and she protects them as she would her children, if she had any.

Then the arrival of new neighbours sets off a chain of events that reignites Amy’s resolution to discover the truth about musician Tim and somewhat flaky Chantel.

A broken pot, a missing ring, a photograph and an almost illegible letter are all the clues she has, but she is determined not to give up.

And as her search begins and she reaches back for memories that will help her, we learn about a loyal friendship, a beautiful love affair, and the poignant reasons behind Amy’s choice of collection of treasure.

And we meet some of the most wonderful characters. Amy herself is an endearing heroine – she has something of the Eleanor Oliphant about her, but we know that she was not always eccentric and uncaring of the people around her. As she delves into her past, a picture emerges of a happy, loving, carefree young woman. Where on earth did she go?

The new neighbours are a delight. Father Richard and his two small sons Charles and Daniel are the perfect foil to Amy’s eccentricities. Laidback to the point of being horizontal, they allow Amy the space to be herself while never abandoning her to her fate as a “crazy bird lady”. Charles, in particular, is the little boy we’d all love to meet – cheerful, funny, clever and loving, and not above a bit of deviousness when it comes to manipulating things his way.

Not everyone is so understanding though – Amy’s other neighbour Rachel complains about the mice; her workmates at her boring office job won’t mind their own business; Richard’s partner Nina is a less than loving stepmother to her two young charges, and highly suspicious of Richard’s friendship with Amy. Meanwhile local council officials keep turning up to investigate neighbours’ complaints about Amy’s hoarding habits.

Worst of all, Chantel’s ex-boyfriend Jack refuses to use his position as a senior policeman to re-open the case into Tim and Chantel’s disappearance.

Undeterred, Amy carries on in her quest, through a beautifully written narrative that takes its readers through every emotion, from hope to despair; love to hate; passion to indifference, and back.

And all the while she nurses her treasures, even the imperfect one – a broken mug is “a patient”; a mended china robin is a companion and friend. But will her quest mend the imperfections in her life, heal her heart and allow her to love and trust, not just objects, but people once more?

How can I sum this novel up? There is so much to discover within its pages – charm, pathos, mystery, humour, characters you’ll come to care deeply for – don’t miss the chance to read it. I promise you’ll be enchanted by the writing, the gently unfolding plot and by Amy Ashton herself, in all her impassioned flaws. 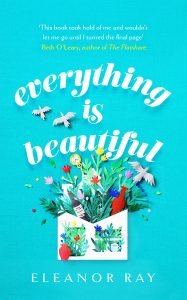 Everything Is Beautiful by Eleanor Ray, published by Piatkus, is available now as an e-book, and in hardback in March

Thanks to Jo Wickham at Piatkus for the advance copy of this book in return for an honest review.

Catch up with the #Blogtour by follwing the links below 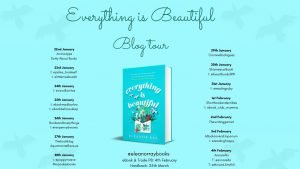 Everything Is Beautiful is Eleanor Ray’s debut novel, inspired by the objects her toddler collects and treasures – twigs, empty water bottles and wilting daisies.