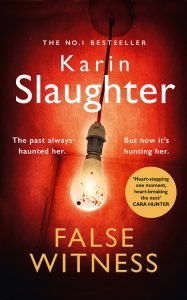 Shades of dark and light make this an intensely thrilling story

This superb thriller offers not just an enthralling plot but a thoughtful, often heart-breaking exploration of the bond that holds two sisters close.

When Callie is just 14 years old, and babysitting 10-year-old Trevor, she accidentally kills his father Buddy, the man who has been sexually exploiting her for years.

Her older sister Leigh helps her cover up the crime. Two street-wise kids, neglected by their mother and abandoned by the state, they know how to make it look as if Buddy has just disappeared.

While Callie descends into a life of drug dependency, Leigh becomes a successful lawyer – but now, over 20 years later, her past comes back to haunt her when she’s directed by her boss to defend a man accused of a violent rape.

The man is Trevor, now known as Andrew, and he soon makes it clear he knows what Leigh and Callie did to his father.

To escape justice herself, Leigh will have to get Andrew off – leaving him free to escalate his own violent behaviour and continue to blackmail her and threaten her whole family.

Harrowing and heart-breaking as the sisters’ story is – and it can get very graphic and gruesome in places – this is a fantastic read from a writer who knows how to plot and pace a story but, more importantly, offer a keen insight into the motivations and emotions of all the characters.

Alongside Leigh and Callie is their mother, a woman who cares more for animals than people, and Andrew’s obnoxious girlfriend Sidney. They’re two of the more unpleasant characters, but are interesting in their own complex way, and balanced beautifully by Leigh’s ex-husband Walter, whose still-burning love for his wife will be deeply challenged by unfolding events.

Like Walter, you’ll come to care deeply for guilt-driven Leigh, sweet, vulnerable Callie and the dilemma they find themselves in.

No matter what they’ve done in the past, and the lengths they are still willing to go to in order to protect each other, you will be praying for a happy resolution for them all the way.

False Witness by Karin Slaughter is published by HarperCollins in hardback, ebook and audible format