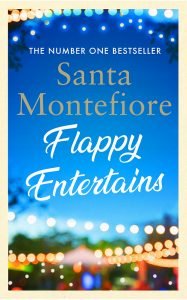 I first encountered the eponymous heroine of Santa Montefiore’s latest novel in her charming story The Temptation of Gracie a few years ago, and remember thinking how I’d love to read more about her.

Not that she is instantly likeable! Far from it! Not since the publication of Queen Lucia back in 1920, which saw the first outing of E.F. Benson’s Emmeline Lucas – the pretentious social climber and self-appointed queen of her small quintessentially English community – has there been such a smug, self-deluded heroine as modern-day monster Flappy Scott-Booth!

But she definitely captures the reader’s imagination. A 60-something woman who has retained her looks and undoubted charm, Flappy rules over the Devonshire village of Badley Compton from her home at Darnley Manor, bossing about her friends, swanning over committees and social clubs and still finding time to practise yoga every day!

Of course she has a PA to help her – the clever Persephone who actually does all the work.

But suddenly Flappy’s dominance is threatened with the arrival of the Harvey-Smiths, who buy grander-than-Darnley’s Compton Court and set about ingratiating themselves with their neighbours.

But their presence not only threatens Flappy’s position in local society – her very being is challenged when she falls under the spell of Charles Harvey-Smith’s mesmerising green eyes.

Suddenly the woman who has denied her long-suffering husband Kenneth her bed for over 10 years, finds herself in the grip of middle-aged passion and in danger of losing control!

With its air of nostalgia, gentle humour and snobbery, this is a super but also surprising read!

The opening chapters set the scene for satire, but Flappy is more than a cipher for the author’s skilful wit – she is a woman who unpeels the protective layers she has built up around herself to reveal a warm, vulnerable and ultimately loving person who cares deeply about her family and friends – even if she is sometimes horrible to them!

Just as EF Benson’s ridicule of Lucia was tempered by affectionate understanding, so is Flappy allowed to develop and grow. Of course a leopard doesn’t change its spots, nor a tiger its stripes (Flappy sees herself as a white tigress to Hedda’s Ayrshire cow) but by then end of the book, you’ll definitely want to read more about Flappy, Hedda and the Compton-Badly cohort!

Flappy Entertains is published by Simon & Schuster in hardback, RRP £12.99 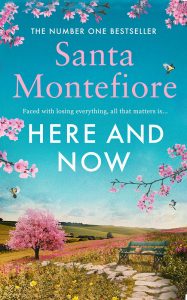 Click here for my review of Santa Montefiore’s Here and Now, out in paperback on April 15