26 Jun From Venice With Love by Rosanna Ley

Posted at 10:44 in Popular Fiction, Romance by Karen Byrom 0 Comments 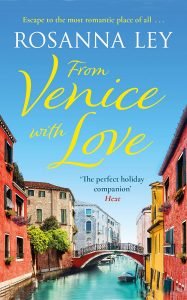 A painting and a bundle of love letters spark a romantic quest!

If you’re looking for a romantic journey across Europe’s top beauty spots, look no further than this romantic family drama!

A painting that hangs on her bedroom wall, and a small stash of love letters discovered in the attic of her family home sends journalist Joanna Shepherd on trips to Venice, Lisbon and Prague in search of family secrets. On the way, she learns so much about herself, not least what she wants from life now that her marriage is over.

Meanwhile, Joanna’s sister Harriet struggles at home with life on the farm and care for her elderly mother – but love and adventure are waiting for her, too, if only she knew where to look! Will she find them through the online dating site Somebody, Somewhere? Or will each date she embarks on prove more disastrous than the last?

Poor Harriet – despite Joanna’s broken marriage, it seems to her that her sister will always be luckier in love. Even their neighbour, Owen, seems smitten by her sister’s charms, always around to lend a hand, whether with chopping wood, calming the girls’ mother, or seeing off the unwelcome stranger who has taken to hanging around the farm.

Mysterious strangers at home and abroad add to the suspense of this novel, while vivid visions on Joanna’s journeys across Europe add a touch of feyness to the whole story. The theme of this novel is connections, both physical and spiritual: in Joanna’s explorations of the three cities’ bridges; in the relationship between sisters, between daughters and mother, between neighbours and friends, and between lovers, past and present.

The pace of the story is slow, but the prose is very descriptive, evoking the sights, smells and taste of both familiar and far-flung places  From the aroma of jam simmering on the stove of the Dorset farmhouse kitchen, to the shades of terracotta, ginger, ochre and dark red of Venetian walls, to the fragrance of Portuguese mulberry trees and the street musicians of Prague, our senses are awakened and we’re immersed in Joanna’s journeys, and eager to discover her final destination … or should that be destiny?