Posted at 11:36 in Crime, Domestic Noir by Karen Byrom 0 Comments 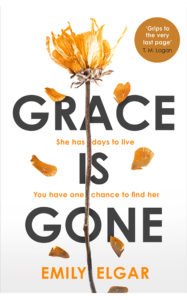 When Megan Nichols is found murdered at the home she shares with her daughter, Grace, her friends and neighbours in the small Cornish community are shocked. Poor Megan had had so much to bear – the tragic death of her small son Danny in a drowning accident, Grace’s multiple health conditions, and an abusive husband, Simon, whom she blamed for Danny’s death and banned from seeing Grace.

Not only is Megan dead, Grace has disappeared! Desperately ill, prone to fits and confined to a wheelchair, she is extremely vulnerable without her medication. It’s imperative she’s found quickly.

While neighbours organise search parties, police go on the hunt for Simon, their natural suspect.

Twenty-two year old Cara Dorman, the Nichols’ neighbour who found Meg’s body and raised the alarm, knows Grace better than most. She’s read her diary and been confidante to the younger girl’s secrets.

Together she and journalist Jon Katrin set out on their own quest to find Grace before it is too late. But when their investigation begins to throws up some unsettling questions, Cara has to ask herself just how well she really knew her neighbours.

And as events progress and secrets start to unfold, she, too, finds herself in deadly danger.

This story has all the necessary ingredients of the perfect murder mystery. It opens with a gruesome murder, offers an obvious suspect, and provides the usual tortured “detective” in the form of journalist Jon, whose own young son is a cancer survivor, and who is now struggling to save his marriage yet can’t prioritise it over his quest for the truth about the Nichols’ case.

Cara is very much the amateur detective – young, eager, sympathetic, she is the perfect foil to Jon, and a truly credible narrator. The story is told alternately from her and Jon’s point of view, with excerpts from Grace’s diary punctuating the narrative.

Sympathetic characters and a pacy plot ensure this story will grip you from the outset. Yet it offers even more. Very cleverly, the author gives just enough clues to keep the reader just one step ahead of the plot, always intrigued, always alongside Cara and Jon in grasping for the truth, yet constantly blindsided by tricky twists and turns that keep you reading with bated breath to the thrilling denouement.