Posted at 10:43 in Historical, Literary Fiction by Karen Byrom 0 Comments 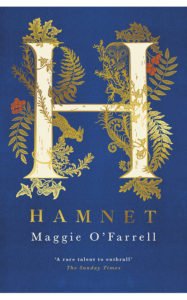 On a summer’s day in Stratford-upon-Avon, a young boy, Hamnet, tears through the house and around the town, seeking help for his twin sister, suddenly stricken with fever. By the time his mother returns from tending her bees and the rest of the family gather, it’s clear that Judith is suffering from the plague. With the physician refusing to come near her, it’s left to her mother, sister and grandmother to tend to her.

But only her twin, Hamnet, can save her, by making the ultimate sacrifice of his own life. And by the time their father, William Shakespeare, gets home, his beloved son is dead.

If ever there was a time for a mother and father to cling together, it is now. But Agnes and Will find it impossible to share their grief.

Can the Shakespeares’ marriage survive the blow?

The narrative takes us back and forward in time so we meet Shakespeare as a young man, frustrated by the narrowness of life with a violent parent, falling in love with Agnes Hathaway, the fey orphan daughter of a local farmer. We learn of their courtship and marriage, the arrival of their three children, and their mother’s constant dread that one will be lost to her. We watch their daily life unfold, as Agnes tends to home and garden while Shakespeare leaves for London to forge a future for them all.

Every so often a book comes along that blows you out of the water, and Hamnet is such a one. Maggie O’Farrell has taken a small footnote of history and turned it into an exquisitely crafted story of love and loss.

The author’s command of language is breath-taking. She turns prose into poetry – much as Shakespeare himself did. Every word on the page has meaning and poignancy – from the young couple’s happy wedding scene to the heartbreaking funeral, you’re drawn into the narrative to share in the joys and sorrows of a family who might have lived 400 years ago but who loved and grieved just like you and me.

This isn’t a biography, but I don’t think any researcher could have shone a better light on our understanding of William Shakespeare.

Just as he haunted his father and inspired his most famous tragedy, Hamnet will haunt you. And just like his father and mother, you’ll remember him with love.