25 Feb Here We Are by Graham Swift

Posted at 16:54 in Literary Fiction by Karen Byrom 0 Comments 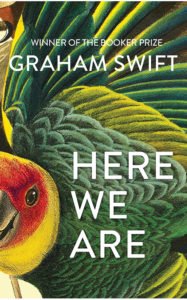 The show must go on …

It’s 1959, and holidaymakers in Brighton are flocking to the end of the pier to see the Great Pablo perform his magic. Ably assisting him is his lovely assistant and fiancee, Eve. In the wings, old army pal turned entertainer and master of ceremonies, Jack Robinson, looks on in amazement as flowers materialise in thin air, doves appear and disappear, and Eve is sawn in half and made whole again, night after night.

The world lies at their feet – but sometime towards the end of summer something cataclysmic happens, and the Great Pablo is heard of no more. Eve is left to pick up the pieces and to reflect, over 50 years later, on that summer of ’59.

The narrative switches back and forward in time, giving a voice to all three characters. And so we learn both Jack and Eve were destined for showbiz from an early age. But Pablo’s was a different path. Born to prosaic parents, he’d been sent, during the war, to Oxford, where his foster father Lawrence took the little eight-year-old to his heart, showering him with love and training him in the magical skills that he’d once practised as Lorenzo.

From this back story a tale emerges of a young boy, happy enough, but confused by emotions and torn by loyalty. His mother and foster parents are a constant in the background of the story, fleshing out Pablo’s character so that, taciturn as he is, we feel we get to know him. Eve, too, lives from the pages, whether as a young awkward chorus girl and an ageing, sorrowful widow. Only Jack Robinson remains slightly elusive – though he is as central to the story as either Pablo or Eve. One wonders if his choice of name is deliberate.

Booker prize-winner Graham Swift’s writing is as magical as any of Pablo’s “tricks”. Tight prose, sharp observation of time, place and character, and a dry wit makes this as much of a joy to read as any of his previous best-sellers. Whether he is writing about Brighton Pier, the east end of London or the quiet peace of rural Oxfordshire, we are instantly transported there. Whether he is telling Jack, Pablo or Eve’s story, we are there with them, feeling their every joy and sorrow, devastated by the events that lead to the break-up of their friendship.

The story is sometimes joyful, sometimes sad, often symbolic. It poses the question of reality versus illusion, and what makes life, like the seaside, “one moment gaiety and laughter, the next sodden misery”.

But as Jack Robinson might have said, “That’s showbusiness.”