I Have Something To Tell You by Susan Lewis

05 Oct I Have Something To Tell You by Susan Lewis 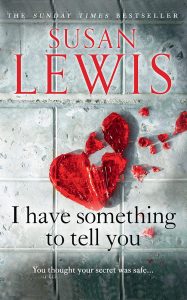 Betrayal comes in many shapes – but can it ever be forgiven?

When Jay Wells, a high-flying lawyer, is called on to represent a man arrested for murdering his wife, she expects a straightforward case of domestic abuse.

But Edward Blake vehemently denies laying a finger on his wife, Vanessa, even though he spent the night alone at home with her body in the next-door bedroom.

He claims she went off to London overnight and he had no idea that she had come home, let alone how she had come to be tied naked to a bed, smothered with a pillow. He saw nothing, heard nothing and can’t imagine who would want to kill his wife.

Jay is inclined to believe him, and applies all her lawyerly skills to finding the truth. Talking to family and friends, she discovers that Edward and Vanessa weren’t quite so happy as they claimed – they’ve struggled to get past a terrible tragedy.

Jay can sympathise with this situation – she’s still trying to forgive and forget her husband Tom’s affair of three years ago. And when he announces, in ominous tones, that he “has something to tell her” she fears fresh revelations that may destroy her own marriage.

As tensions at home grow, Jay flings herself into her work, becoming ever more involved in Edward Blake’s case. But she struggles to stay professional, for the man has a magnetism about him that draws people around him, and it seems Jay is no less immune to it than anyone.

But is he telling the truth? Can she trust him any more than she can trust Tom?

And if he didn’t murder Vanessa, then who did …?

I love Susan Lewis’s writing! She’s not afraid to tackle challenging topics, and does not shirk from the unpleasant realities of life that affect all ages and classes. She’s so good at getting to the heart of moral dilemmas, and I Have Something To Tell You is a story that certainly challenges its characters’ responses to some knotty problems.

In a well-paced plot, the business of how lawyers set about preparing their client’s defence and how they work with the police is skilfully drawn, and never dry. The tension builds nicely, and, just like Jay, the reader is never sure who to believe.

Jay is a super character, made all the more sympathetic by her vulnerability. Even though she is sometimes in danger of being led by her heart rather than her brain, which might seem absurd for such an experienced lawyer, the betrayal she’s experienced in the past makes her present behaviour convincing.

Edward and Tom are perfect foils for Jay – both powerful men brought to a position of weakness by events over which they claim to have had no control.

In a story with issues that are not all black and white, can justice be served? Can redemption be won? And will Jay stay true to her principles?

These are questions that will keep you reading right up to the end!

I Have Something To Tell You is published by HarperCollins in hardback, RRP £12.99