I Know What You’ve Done by Dorothy Koomson

14 Jul I Know What You’ve Done by Dorothy Koomson 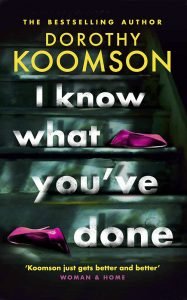 What’s going on behind the lace curtains at Acacia Avenue?

It’s such an exclusive street – but its inhabitants are hiding so many secrets … or so they think!

Little do they know that, at No. 21, Priscilla Calvert has been spying on them, and keeping a detailed diary that could land them all in trouble, with partners, with friends, and even with the police.

So when Priscilla is attacked and left for dead, there are plenty suspects …

Rae at No. 11 is the first to learn something is wrong when Priscilla flees to her home after the attack. Poor Rae – she left London for this quiet part of Brighton to ensure her own and her family’s safety, and now she’s caught up in a violent drama!

But who is responsible for the assault on Priscilla.

Could it be Clark, Rae’s husband? He’s been spending way too much time at No. 47, with Lilly, a single businesswoman with plenty charms …

Could it be Lilly? She doesn’t want Rae to discover what she’s been up to – and maybe she has other reasons for wanting Priscilla dead, too.

Then there’s Bryony at No. 24. Controlled by coercive husband Grayson, she’s shown she’s capable of turning – but has she turned violent?

And with Grayson showing his true colours right from the start, he is a definite suspect!

Not to mention Dunstan, Alana, Hollie, and all the other residents of the street – they’ve all been up to something.

All the clues are in Priscilla’s diary, which she has entrusted to Rae. She’s not going to part with it to the police until she’s read it – she wants to know what Clark has been up to.

Will learning about her neighbours’ shenanigans lead her to the truth about who attacked Priscilla? And will it put her in danger?

Told from several different viewpoints, this is a classic “unreliable narrator” story where the reader has to keep all their wits about them to keep abreast of the plot. There are so many twists that I defy anyone to guess the outcome, but you’ll certainly enjoy the ride.

Each neighbour’s back story is thrilling in itself, and the tension racks high as they fight to protect their carefully-curated lives.

Rae is the central focus in the multi-layered drama, and a very sympathetic character, while poor Priscilla is portrayed through her diary, and through her neighbours’ eyes, as a snoopy, vindictive, gossipy woman who deserves all she gets.

And yet she deserves justice more.

With its well-crafted twisty, turny plot that hold surprises up to the last pages, this is a cracking read.

I Know What You’ve Done by Dorothy Koomson is published by Headline
in hardback, ebook and audible format

Dorothy Koomson is the best-selling author of 17 books, including the award-winning The Ice-Cream Girls. Discover more and sign up to her newsletter  here