28 May I Made A Mistake by Jane Corry 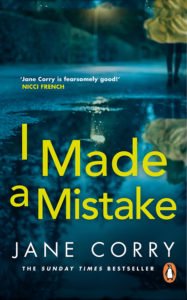 Everyone makes mistakes – but does everyone have to pay?

Jane Corry is very good at building up pictures of ordinary women living ordinary lives, then tearing them down with revelations of past misdeeds and guilty secrets. In I Made A Mistake, she presents us with not one, but two of these women, as Poppy Page and her mother-in-law Betty reveal the separate stories that led to each making a mistake that would blight their lives forever.

On the surface it seems Poppy has it all – a successful business running an agency that recruits extras for the film and TV industry, and a loving family to come home to. So how has she found herself standing in front of a jury, admitting to a few stolen hours with an ex-lover that has led to terrible tragedy?

To find out what has brought her here, we have to go back a few weeks, months and even years, as gradually a picture emerges showing Poppy’s life hasn’t been quite as blessed as it seems. There are cracks in her marriage and problems with her business.

And what of Betty? In a dual narrative she too reveals a story that belies the smart, confident woman she is today. An unhappy marriage led to her, too, making a mistake. She’s lived with the consequences for years – how will the more recent tragic events in her daughter-in-law’s life affect her?

Should we blame or pity Poppy and Betty? I defy any reader not to identify with either character. In some ways they represent “everywoman”, doing their best to keep family together, to be the perfect wife and mother, putting their own needs last on the to-do list. When their lives get messy and emotional, they’re honest about their mistakes.

They don’t need others to judge them – they’re so hard on themselves that it seems neither will ever grant herself absolution. But if they’re to find resolution, they must forgive themselves.

I think what I enjoyed most about this book is that both narrators were honest with themselves and with the reader, and yet the plot is never obvious. The narrative keeps us guessing as to what has happened – and what is going to happen – in both Poppy and Betty’s lives.

With a murder at its core, the plot is dark, of course, yet Jane Corry’s handling of her two protagonists is thoughtful and sensitive – she reminds us that it’s not so much the mistakes you make that matter; it’s how you put them right.

A thrilling yet thought-provoking page-turner.

Jane Corry is the Sunday Times best-seller of thrilling novels with dark domestic dramas at their heart. She also writes a light-hearted but moving account of her “other” life as a grandmother at My Weekly online.