10 May Iron Queen by Joanna Courtney

Posted at 10:48 in Best-selling Author, Historical by Karen Byrom 0 Comments 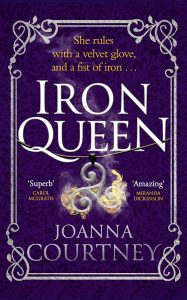 Joanna Courtney is one of my favourite historical authors. Her Queens of the Conquest trilogy were a fascinating insight into the imagined lives of Queens Edyth, Elizaveta and Matilda, the wives of Harold Godwin, Harald Hadrada and William the Conqueror, three real life women who played a vital part in England’s history.

In Shakespeare’s version, the Iron Age princess is banished to France by her father after she declares she loves him just as much she ought, no more nor less, leaving her greedier sisters, Goneril and Regan to reap the benefits of Lear’s foolishness as he splits his kingdom between them.

In this reimagined tale, though, it’s Cordelia grandmother Mavelle, who rules the Coritani tribe from her fortress at Beacon Hill. In this matriarchal society, Lear – or Leir as he is known here plays second fiddle – with her mother dead, Goneril is the natural heir.

Hungry for power, she manipulates her grandmother, father and sisters to her will, uncaring of anyone’s feelings but her own. Even her right-hand woman, and lover, High Druidess Olwen can’t control her.

Against this background, Cordelia falls in love with apprentice smith, Taran, brought to the Coritani by Leir to make a light iron frame for wings so that Mavelle can fulfil her burning desire to fly like the birds.

Then Goneril casts her rapacious eye on Taran, and suddenly Cordelia is in danger of losing the man she loves, along with the gentle life she has hitherto led.

This is an exciting tale, so beautifully researched that life in the Iron Age forts feels very authentic. Everyday life is described through the changing seasons, with all the benefits, hardships and ceremonies they bring. Though the tribe is at peace with its neighbours, there is always a feeling of danger in the air, while the presence of druids – and the enactment of human sacrifice – brings a mystic element to the story.

The matriarchal society the author imagines also has a strong air of authenticity, and it’s good to see women take full centre stage, though I did feel the men’s complementary roles had the effect of slightly emasculating them.

But when needs must, Leir, Taran, Regan’s husband Aledus and the Belgic prince Lucius all step up to the plate as loyal strong, warriors whose bravery cannot be questioned.

I particularly liked the way the narrative explored the sisterly bond shared between Goneril, Regan and Cordelia. It lent a whole extra layer of emotion to an already enthralling and exciting plot, and kept the suspense high – would Goneril really sacrifice her siblings along with her father for the sake of riches and power?

A marriage of myth and legend, well researched and beautifully written, this is a truly fabulous read.

Iron Queen by Joanna Courtney is published by Piatkus, RRP £9.99

Joanna Courtney is the author of The Queens of the Conquest trilogy and the Shakespearean Queens trilogy. She also writes wonderful contemporary novels as Jo Wilde and as Anna Stuart – you can read my review of The Berlin Zookeeper here

The Foundling by Stacey Halls

Mary Toft or The Rabbit Queen by Dexter Palmer