Posted at 15:37 in Popular Fiction by Karen Byrom 0 Comments 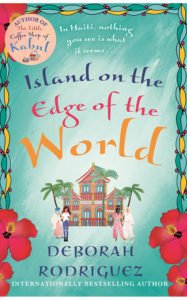 Venture into the teeming streets of Haiti with three intrepid friends

Think of Haiti and you think of earthquakes, of devastation and destruction, poverty and disease. But there is so much more to this beautiful country, not least a fierce, proud, independent people, as the disparate heroines of The Island on the Edge of the World discover when they arrive there in search of family truths.

Obstinate, elderly, nearly-blind Bea persuades her granddaughter Charlie that her estranged mother, April, is in danger. Married to a missionary, a control freak who banished Charlie from their lives when she was a teenager, April is now living somewhere in Haiti. Charlie isn’t keen to re-establish contact, but Bea is persuasive and so the pair set off for the island.

En route, they make the acquaintance of Lizbeth, who is on her own mission. Months after her son Luke was killed in a car accident while on leave from his aid job in Haiti, she’s received a letter addressed to him from a girl called Senze, who claims to be pregnant with his child. Lizbeth is determined to track down her grandchild – but she does not have a clue how to go about it!

Bea and Charlie take her under their wing and enlist the help of translator and driver Mackenson to track down the elusive Senze. But in the bustling chaos of Haiti’s teeming streets, that proves no easy task.

Meanwhile, Charlie traces her mother – but how can any reunion lead to reconciliation when Charlie’s evil stepfather is still on the scene?

What a great story. The plot alone is enough to keep you enthralled, but add to that the flavour of a foreign land that gives lie to any perceptions you may have had about it from news reports. The author brings the streets and people of Haiti to life with descriptive passages that encompass the culture, the art and the history of this proud land. Not to mention Voodoo, in which Bea has a particular interest, being something of a psychic herself. Well, how else would she know April was in danger?

There’s danger, too, of course, on the streets of Port-au-Prince, and pathos, especially when Mackenson reveals the struggles that Haitians face daily, often hampered rather than helped by amateur “do-gooders”.

But Bea, Charlie and Lizbeth are not there to solve Haiti’s problems, but their own. They are very different characters; the first obstinate, the second brave but strangely vulnerable, the third timorous and yet so brave in what she has to do. Together they encompass what it means to love unreservedly in this glorious tale of motherly, daughterly and grandmotherly devotion that surmounts all obstacles in its way.

And each finds in Haiti answers not only to their quest but to questions about themselves they did not even know they had.