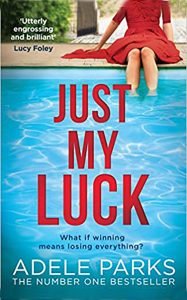 Who’ll be winners and losers in this story of a lottery win?

Best-selling writer Adele Parks is back on fine form with the paperback publication of another thrilling dark domestic drama.

The story opens with great news for Lexi and Jake Greenwood – they’ve won the national lottery, to the tune of 18 million pounds! They don’t know what they’re going to do with money, but they know what they’re NOT going to do – and that’s share it with their former friends, Fred and Jennifer Heathcote and Patrick and Carly Pearson. Just the week before they’d fallen out over their informal lottery syndicate – with the Heathcotes and Pearsons declaring it a vulgar waste of time.

But now of course, they want their cut, disputing Lexi and Jake’s version of events. They’re prepared to go to any lengths to get what they see as their fair share.

More clear-eyed than her husband Jake – who is intent on spending the money like water – Lexi suspects before the cheque is even in her hand that their good luck isn’t going to bring her family happiness.

The publicity forces her out of her job at the Citizen’s Advice bureau. Her teenagers Emily and Logan encounter problems at school, her very home is no longer a place of safety.

And all the while she is watching her back as her former friends’ acts of betrayal, and the problems the money brings, impinge more and more on her family’s life. With life spiralling out of control, it’s time for her to sort things out, once and for all.

You can always expect a roller-coaster ride from Adele Parks’ plots – she understands people so well, and is masterly at presenting all sides of their characters, for good and bad, while keeping her reader in suspense as to just what they have done – and what they are going to do next.

Who’s telling the truth about what happened on the night the syndicate was abandoned – and what other secrets are the friends keeping from each other? As the story unfolds, the narrative becomes increasingly tangled in themes of friendship, family, greed, betrayal and revenge.

It’s nail-biting stuff –  Adele Parks knows how to ramp up the suspense and vary the pace. She doesn’t neglect the positive side of being rich beyond the dreams of avarice, and it’s fun to see Jake bring home a bright yellow Ferrari, the kids planning a party to rival those of Sir Elton John’s, and Lexi shedding some of the burden of her win to a more deserving case than any of her friends or family.

But in the end the reader knows as well as Lexi that money alone doesn’t bring happiness, that people are more important than material possessions, that family is most important of all and is to be fought for at all costs!

Published by HQ in paperback RRP £8.99

This review first appeared on www.myweekly.co.uk in May