Larkin’ Around This Summer

26 Jun Larkin’ Around This Summer

Posted at 14:40 in Blog by acerockcola.com 0 Comments 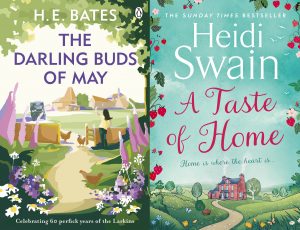 Can you believe it’s nearly 30 years since Catherine Zeta-Jones made her name in the TV serialisation of The Darling Buds of May? Now it’s being remade, with Sabrina Bartlett of Bridgerton taking over the role of sexy Mariette Larkin. Bradley Walsh will play Pop – made beloved by David Jason – while Joanna Scanlan replaces Pam Ferris as Ma.

I can’t wait! Hot lazy summer days in Kent are just the tonic we need in our lives – now more than ever!

I first read The Darling Buds of May in my late teens and was instantly captivated by the larger-than-life Larkin family and their happy-go-lucky approach to life. From Pop, so lavish with his – and the tax man’s cash – down to Victoria, youngest of their six children, every character is “perfick” as Pop would say. They may live in a giant junkyard, but their home is their castle, and Pop is king of all he surveys, distributing largesse to family, friends and neighbours.

Ma, meanwhile, ensures her family is fed – and how! – with pies and puddings, cakes and crumpets, roasts and rarebit, and even the occasional bundle of fish and chips!
Into this mix comes Mr Charlton, the tax man who is trying to pin down Pop about his finances. But like us, he is soon seduced into the Larkin way of life, enjoying the twin earthy pleasures of Mariette’s physical attractions and Ma’s culinary offerings.

The sun always shines, the bluebells always bloom, hops ripen in the fields, and minor hiccups in life are soon sorted out in this idyllic pastoral setting created by H.E. Bates of over five books. Larkin by name and larkin’ by nature, the family get up to all sorts of gentle mischief, keeping the reader enthralled and entertained.

The Larkin chronicles are up there in my favourites of summer reading, but when I want to go abroad, I turn to My Family and Other Animals by naturalist Gerald Durrell. Set in Corfu, it explores years Gerald, his widowed mother and older brothers and sister spent on the Greek island between the world wars. Like HE Bates’ stories, the book is populated with wonderful characters, celebrates the natural world and captures the halcyon days of a bygone era.

Once I’ve re-read these stories, I’ll be turning my attention to some of the new books out this summer that offer us that same happy escape. Top of my list this year is A Taste of Home by Heidi Swain (Simon & Schuster, PB, £7.99). A contemporary romance, it is set in the fictional market town of Wynbridge where Fliss Brown, newly-returned from her adopted home in Italy, finds herself tasked with restoring the fortunes of her family’s fruit farm. Visions of luscious strawberries and raspberries leap from the pages, fields glow golden in the summer sun, and the bustling market stalls of Wynbridge groan with fresh produce, baked artisan goods and good cheer! Meanwhile, there’s a barn full of junk to be transformed into a restaurant, serving up delicious feasts of which Ma Larkin herself would be proud!