Lessons In Chemistry by Bonnie Garmus

Posted at 10:48 in Debut, Literary Fiction by Karen Byrom 0 Comments 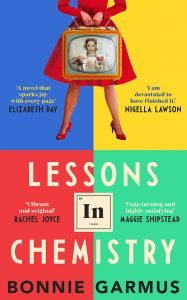 A brilliant and original story with a fabulous heroine!

“Positive, happy and upbeat” – that’s not Elizabeth Zoff. Instead, the single mother scientist’s passion for her research and dogged determination to be true to herself in the man’s world of the 50s and 60s is what defines her, and makes her one of the most interesting characters in fiction that I’ve come across.

Struck by tragedy more than once in her 30 years, abused and ridiculed by her male peers and struggling to make a living for herself and her daughter, Elizabeth accepts a job as a TV cook, presenting “Supper At Six”.

True to her principles, she uses this opportunity to delivery chemistry lessons to the nation’s housewives, who are hooked by this serious and uncompromising woman who is all too often the first person to take them seriously and make them believe in themselves and their talents.

We first meet Elizabeth as she is beginning her new career – having given TV producer Walter a dressing-down about the importance of feeding his small daughter nutritional meals, she’s impressed him so much he wants her on TV.

The story then goes back a few years to when Elizabeth is beginning her career as a scientist. The men in the labs, feeling threatened by this brilliant woman vilify her, steal her credit and even sexually abuse her.

But it’s in the labs she finds her soulmate, the equally brilliant Calvin Evans. Together the two forge on with their careers and their romance – until tragic circumstances overtake their lives and leave Elizabeth alone again.

The central theme of feminism in this story is served up with so many strong threads as the writer explores the family tragedies of the two main characters, Elizabeth and Calvin; male abuse of women in the workplace and at home; and the importance of discovering your true self.

But with friendship and laughter and a beautiful love story right at its heart, it’s not at all depressing.

The writing is witty and wry, and the characters are joyous – especially Madeline, Elizabeth’s very precocious small daughter, and their dog Six-Thirty, who plays a central role in the story.

I thought the title of this book was so clever – amidst the real chemistry lessons Elizabeth delivers up to her eager audience, the narrative explores the chemistry of interaction between people, the past and their future, without ever labouring the point.

A brilliant read which I’d recommend to anyone.

Lessons in Chemistry, published by DoubleDay, is available in hardback and ebook