20 May Madam by Phoebe Wynne 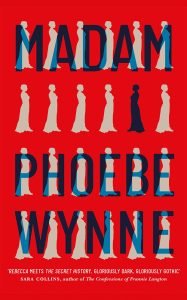 A modern-day boarding school tale to give you the shivers!

There’s a truly Gothic feel to this modern-day boarding-school tale! It’s 1992, and Rose Christie has just taken a post as head of Classics at Caldonbrae School on a remote west-Scotland coast, where daughters of the UK’s elite are sent for a first-class education.

But right from the outset, something strikes Rose as not quite right. The girls are precocious, the staff guarded, the headmaster a distant, unwelcoming figure. Why is more emphasis put on lessons like discipline and conversation than on academic subjects? What happened to her predecessor Jane? What’s going on with sixth-former Bethany, who stalks Rose like a shadow, yet seems to resent her very presence?

And just what are the “values” that the girls set so much store by, which no-one will explain to Rose?

As Rose goes looking for answers, the walls of the school close in, and she finds herself trapped physcially and mentally – for under the guise of a caring employer, the powers-that-be now control every aspect of her life, including the well-being – or not –  of her invalid mother.

Will their threats be enough to keep Rose in line? Or can she save herself, and the girls in her care from their presumed destiny?

This was a really powerful story. Sinister from the outset, with its description of the school building as a hulking black mass, its roof sporting half-faced gargoyles bathed in shadows, and its suggestion of curses, hauntings and sinister secrets, it also explores the theme of female power – or lack of it – in our very recent past.

I don’t think it’s a coincidence that the author chose a timeframe that allows her to reference the late Diana, Princess of Wales – surely, in some ways, the epitome of the girls at Caldonbrae?

The author also uses tragic figures of women from classical myth and legend to illustrate how women’s destiny may be shaped by men, but cannot always be controlled by them. It’s an analogy not lost on Rose – but will her young pupils get the message?

With a perfectly-paced plot that carries us along with Rose as she gradually realises the horror of the situation, descriptive prose that builds a tense and menacing atmosphere, and a cast of characters – not many likeable, but all truly mesmerising, this is a gripping, convincing, cautionary story of what can happen when girls are not persuaded of their true value in this world.

Madam by Phoebe Wynne is published by Quercus in hardback, RRP £14.99