14 Aug Mary Toft: or, The Rabbit Queen by Dexter Palmer

Posted at 12:28 in Historical, Literary Fiction by Karen Byrom 0 Comments 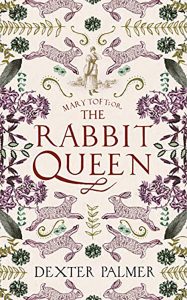 The world is full of wonders and this book captures them brilliantly!

Enter into the eighteenth century and the life of a small community where there are strange goings on. A travelling show has come to town, exhibiting “freaks of nature” like the boneless woman, the wolf man and the woman with two heads. What is real and what is perception, wonders young surgeon’s apprentice Zachary.

Then he is called upon to witness a wonder of his own, when he and his master are called to treat a patient with a most peculiar condition…

And so we are introduced to Mary Toft, the eighteenth century woman who claimed she gave birth to rabbits.

Told through the eyes of the eminent surgeons who attended her, Mary’s story becomes more than a mere narrative – we are treated to a philosophical discussion of how and why the world is so willing to believe in wonders – and how far they’ll go to create them! Rich or poor, clever or dull, young or old, it seems, to quote Shakespeare, that we all want to believe that “there are more things in heaven and earth, than are dreamt of in your philosophy”.

I did find myself getting a little bogged down in the philosophical discussions of what makes an event real – is it because enough people believe in it? – but the author wisely gives us an down-to-earth character to follow in young Zachary, He’s not so caught up in the strange events around him that he can’t share with us his amazement at the sights and sounds and smells of London and his growing feelings for a certain young woman in the capital.

This makes for a rich, atmospheric and emotional read. I really enjoyed this book.