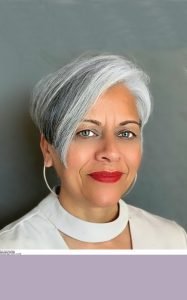 Thanks so much for agreeing to a Q&A for my online blog. I really enjoyed both The Henna Artist and The Secret Keeper of Jaipur and would love to know more about them.

Can you tell me what inspired you to write The Henna Artist?

I wrote the first novel in the trilogy for my mother, Sudha, who had to leave college for an arranged marriage at age 18 and had three children by age 22, never having had the freedom to choose her destiny. But to me, her only daughter, she gave the incredible gift of making my own decisions about marriage, family and career. As much as I wanted to return that gift, I couldn’t change her life for her. But I could create a fictional character in Lakshmi, who deserts her marriage to live the more independent life that my mother had been denied.

The book’s heroine Lakshmi and her sister Radha are very different characters. Are they based on people you know?

Lakshmi is equal parts my mother and me. Her features, including her light green eyes, are my mother’s. So is her resilient spirit. But the way she navigates the patriarchy is largely my experience in the corporate world. I don’t have sisters, but I do understand what it’s like for girls growing up in a patriarchal culture who have agency taken from her little by little—that’s why Radha resists Lakshmi’s attempts to tame her. Malik resembles many street children I’ve seen in the cities of India: resourceful, clever, and quick to learn. I modelled the younger Maharani Latika after Maharani Gayatri Devi of Jaipur, a Swiss-educated, Westernized woman who sought to abolish purdah. Other than these characters, there are no others in my novels who are based on real people; they come from my big, multicolored imagination!

Both Lakshmi and Radha push for the right to make their own choices in life. How important was it for you to smash stereotypes of Indian women that people might hold through their story?

I feel very strongly that each woman, no matter what culture she’s from, has the right to determine her own destiny. That includes making decisions about when she marries, whom she marries, whether she chooses to work outside the home or inside it, and what she chooses to devote her time to. When women are denied that agency, I’ve seen first-hand the depression, resignation and bitterness that overtakes their lives. But given power over their future, women can have a seat at a much larger table and support each other in their shared quest for gender equity—for both the female and male members of our species.

In The Secret Keeper of Jaipur, Nimmi is another woman who stays strong in the face of great challenge. How did you conceive her story?

I was researching the indigenous people around Shimla who come to Dr. Kumar’s Community Clinic and became fascinated by the nomadic tribes who migrate with their sheep, goats and buffalo across the Himalayan mountains. The image of a young woman in the throes of labor along the steep trails came to my mind. I knew in that moment that her labor had been induced by the shock of losing her husband to a treacherous gorge and that she and Malik would be drawn to each other. Don’t ask me how I know these things—the scenes come to me fully realized—I just transfer them to my laptop.

It was great to meet old friends in The Secret Keeper of Jaipur – especially Malik, Lakshmi’s protégé. Were you always going to write a story around him?

As I was revising the 30th draft of THE HENNA ARTIST, I realized how many stories about Malik and Radha hadn’t made it into the novel. For example, I had eliminated Malik’s backstory: why he lived in the Pink City Bazaar, who took care of him, and why he was finally forced to leave Jaipur. I’d also revised the epilogue, which took place 10 years into the future when Malik was a grown man with his own ways and means. As I turned in the final draft of the first novel, Malik’s voice became insistent, wanting me to tell the story of his life. So I began with the pieces I’d already written about and developed the narrative from there. After living with these characters for the 10 years it took me to publish THE HENNA ARTIST, Malik’s story, THE SECRET KEEPER OF JAIPUR, flowed and flowed and flowed.

With tragedy and duplicity abounding, the plot of The Secret Keeper of Jaipur is very thrilling. How did you conceive and research it all?

I knew that gold running across the Himalayas, where Shimla is located and where Malik attended the Bishop Cotton Boarding, has always been rampant. That got me wondering about India’s gold obsession—all those wedding dowries! So little gold is actually mined in India that I began researching how all the ways it’s brought into India. Knowing how enterprising Malik can be, I started to imagine how he might get involved in the ferrying of illegal gold. I also wanted to bring back the characters from Jaipur, and before I knew it, the story wrote itself (it does happen!).

Your descriptions of India are so rich and atmospheric – do you recall it all vividly from your childhood years, or do you visit frequently, in normal times?

While writing THE HENNA ARTIST, I made four or five trips to Jaipur with my mother, and so many memories of our time there as a family came flooding back. I interviewed my parents, extended family, the Pink City shopkeepers, Rajput families, the principal of MGD School (which is the model for the Maharani School in the novel). I watched Indian movies from the 1950s (the films of Satyajit Ray are among my favorites, as was the charming Mr & Mrs 55 starring Madhubala!). I also read South Asian literature from that time period—did you know about our strong literary tradition, including Tagore, Narayan and Markandaya? My family used to vacation in Shimla or Mount Abu during the endless Rajasthani summers and I used both my memories and family photos as reference.

Would you choose to live in bustling Jaipur or tranquil Shimla?

I like both and admire in their different energies. Now in my 60s, I prefer a quieter life in natural surroundings, so I lean slightly toward Shimla. The majestic Himalayan mountains, fragrant pines and deodar cedars take my breath away!

What’s next for Lakshmi, Malik and Nimmi? Do you have another book planned?

Once THE SECRET KEEPER OF JAIPUR was off to the printers, Radha’s story began to crystallize, and I realized I needed a third book to finish the trilogy. From the first novel, I knew Radha would marry a Parisian, move to Paris, and have two daughters—Shanti and Asha (I even knew their names!). I also knew something else: Radha was as ambitious as Lakshmi. She would go on to get a chemistry degree and work as a lab assistant in a fragrance house. Just as she’s on the cusp of designing a signature scent for her Master Perfumer, she’ll be visited by someone she hasn’t seen in 18 years, and it will be the shock of her life! I’m currently researching book #3 in the trilogy both in New York and in Paris!

Aside from Lakshmi, Radha and Nimmi, Sheela is one of my favourite characters from both books. There’s so much more to her than her spoilt persona of a rich man’s wife suggest. Would you be tempted to follow on her story in another book?

I hadn’t thought about expanding Sheela’s story, but what a great idea! In one of the 435 book groups I’ve been invited to during the past year, one reader asked if my life would have been similar to Sheela’s had I grown up in India my whole life. What an insightful remark! Yes, I replied, I would have led a pampered life with a successful husband and probably had several children, but, like Sheela, I would have resented the societal limitations on my life. It was our immigration to the West in the 1960s that turned my mother into the feminist she became (and always was at heart) as well as the champion of my freedom.

Finally, can you tell us some of the other factors that influence you as a writer?

I’m an accidental writer. As a young immigrant, I devoured books by Dickens, Sands, Mitchell, Austen, and Steinbeck to understand my adopted culture. I was shy and preferred to watch and learn and observe. I also spent hours drawing, sketching and painting. When I met my husband, the writer Bradley Jay Owens, he recognized in me a talent for creating stories. It took me another 15 years before I enrolled in a Masters in Fine Art Program in Creative Writing. At the time, I’d been in the advertising and marketing business for decades, creating mini stories for TV, radio, print and digital media. From Day One of my MFA program, I hit the ground running, realizing that I LOVED creating worlds of imperfect, realistic characters who could teach me and readers new ways of seeing the world, and I’ve never looked back!

Thanks so much for giving us this insight into your books and your writing life, Alka. I can’t wait for the next one to be published! 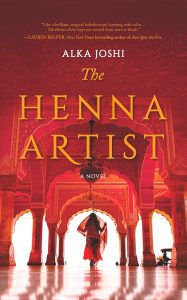