As he publishes Nothing Ventured, the first book in his thrilling new series, born storyteller Lord Jeffrey Archer shares his love of reading and writing 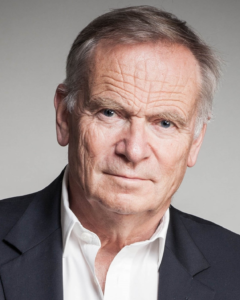 What book first gave you the reading bug?

When I was around eight, my mother, a keen reader and writer, put me on to Swallows And Amazons and the Just William series. I saw myself as William and was just as naughty! Swallows And Amazons was unputdownable – though I did not try to emulate their adventures. I was more of a bookworm.

Which authors do you enjoy reading now?

John Buchan – The 39 Steps in particular – Ian Fleming and Daphne Du Maurier. They are all storytellers and why have they survived? Because they are storytellers. They know how to give you good characters and good plots.

My favourite author is Stefan Zweig – I think Beware Of Pity is a masterpiece. A Gentleman In Moscow by Amor Towles is another. It’s the book of the year for me.

When it comes to non-fiction, I recommend Audrey Salkeld, who wrote The Mystery Of Mallory & Irvine. I’m an ambitious person and the idea of conquering Everest, and the world not knowing you had, really captured my imagination.

A book that I enjoyed that would surprise your readers is Reunion by Fred Uhlman, the tragic story of a Jewish boy and a German aristocrat at the same school, just before Hitler came into power. Sometimes you’re very glad to come out of your own untroubled world and read about something you know nothing about.

Would you say these writers have influenced your writing?

Everything is bound to influence you – you take it in and store it. People, experiences – it’s not just books.

Were your talents recognised early on?

I won a school reading prize but I didn’t win any prizes for writing. However, Alan Quilter, my English master, gave me my love of Shakespeare and my love of literature, unquestionably.

I didn’t realise, of course, until years later, what a formative role he played in both my writing and my love of literature.

What motivated you to write?

Money! I left the House of Commons in debt and turned to writing in desperation. My first professional writing break, Not A Penny More, Not A Penny Less, was turned down by 14 publishers. It was finally published by Jonathan Cape, and took off when Kane And Abel came out.

Kane And Abel sold a million copies in the first week, and is now on its 121st reprint – and celebrating its 40th year! Over 100 million people have read it. I would say Kane And Abel changed my whole life.

Who are your favourite characters?

I’ve got two. Old Jack in volume one of The Clifton Chronicles – I loved him, and I love William Warwick. William Warwick is going to make me rich and famous!

William is an art lover, like you. Tell us a little about that.

I fell in love with an art student called Jill when I was about 16 and she was 17. The only way I could get anywhere near her was to go along to art galleries. I fell out of love with her and in love with the art.

I’ve been in love with the art now for 60 years. I’ve been a collector for 40 years and I go to an art gallery every week.

What award or accolade has meant the most to you?

In The Washington Post, the Professor of English from Princeton University said I was the new Dumas. I took that as a great compliment. He wrote The Count of Monte Cristo and The Three Musketeers in the same year. He was a storyteller.

And how does your family react?

Well, my wife Mary’s not a natural fan. She’s more a literary person, but she does read the books, of course.

Our son William, a theatre producer, is also more academic; he reads a lot and he loves the theatre.

My second son James is a genuine fan – he would be there on the first day whether he was my son or not. I don’t let him read a book until the publishers have it – after that, I consider anyone in the family can read it.

Do you listen to your fans?

Readers’ reaction is inspiring! I listen to what the public say very carefully, I read their reviews and they have been amazingly generous. I do have this one bonkers fan who has read Kane And Abel 314 times. She knows it better than I do.

What do you think is the secret of your success?

I’m a storyteller, and an observer of character. The characters in the new book – William Warwick and his father, plus the wicked Miles Faulkner – will go through all the series.

Readers of The Clifton Chronicles said they wanted to know more about William Warwick, so I got on with it. You’ve got to listen to your readers and give them what they want.

You’re planning seven more books in the William Warwick series. Is that exciting or daunting?

I do twelve drafts of every book, and write for eight hours a day, in four blocks of two hours. William is going to go from constable to commissioner so I’ve got to live to 85 to make sure he does!

Any other projects on the go?

I enjoy writing short stories. Sometimes you are told an incident which is good for 10 pages but you couldn’t stretch to 150, let alone 300 or 400.

I have written 92 short stories and next year, to celebrate my 80th birthday, I have asked the public to choose their 20 favourites and we are going to be publishing them for Christmas 2020.

It will be called The Short, The Long And The Tall, and will be illustrated by Paul Cox who illustrated the Durrell books. It’s my birthday present to my readers – and myself.