Well that has to be a first! A warm, sparkling romance featuring a pair of Kunekune pigs! Portia and Percy are just part of the charms of Moonlight Over Studland Bay, Della Galton’s lovely new story – I’m so pleased to be part of the blogtour for this, and to introduce you to Della’s writing if you haven’t met her before.

In her 30s, Sam Jones feels stuck in a rut! She’s in a dead-end job (with a stuffed-shirt boss) and longs to expand Purbeck Pooches, the dog-sitting service she runs in her limited spare time. And now, to top it all, she’s feeling broody as her friend and housemate Abby brings baby Jack into the world and into Sam’s life. Falling for Jack’s charms, suddenly babies seems almost as appealing as puppies to Sam – the problem is, she doesn’t have a partner to oblige in the baby-making stakes.

Nothing daunted, Abby enrols her friend in dating site Country Lovers, and Sam embarks on a series of dates, some more successful than others. In the meantime, she’s walking dogs, chasing escaping goats, organising a spot of Kunekune pig-sitting and trying to keep on the right side of her boss Rex Fielding, who understands her frustrated ambitions but needs her full-time attention in the office at all times.

In a series of often hilarious, sometimes emotional and always entertaining events, the story moves forward to see Sam come to grips with the various challenges in her life. But is the perfect man out there for her? There’s no shortage of candidates as Sam considers the benefits of having a baby with her landlord, Ben, Abby’s brother Matt, her series of dates and even with Rex himself. She’s not wholly serious about his baby-making potential, of course – but wouldn’t it be nice if somewhere out there her perfect man was just waiting for her!

This story just raced along. Della Galton’s lively descriptions ensure characters spring to life from the page – and what an endearing bunch they are. From Sam herself to kooky Abby to  colleague hypochondriac Heather,  to pet pig-keeper Mr B, the eccentric chef of neighbouring hotel The Bluebell Cliff (featured in Della’s previous book) they all add fun and drama to the narrative. There’s no shortage of handsome heroes either – leaving scope for a fair bit of passion in both Sam and Abby’s life.

Not just the characters but the surroundings come alive in picture-perfect descriptions of Sam’s cottage, her workplace, the seaside and beach and even the funfair where she has to conquer her fear of heights in the company of all her workmates, including an amused and sympathetic Rex. Wherever the narrative takes you, sights, sounds and smells are all evoked to add to the reader’s enjoyment of the story.

As you’d expect from a story that involves babies, animals and online dating, the dialogue and action are both sweet and funny, but Della Galton also offers a fine emotional balance in Sam’s day-today struggles, her encounters with prospective partners and her dismay at her parents’ sudden decision to sell their B&B and move abroad.

And of course there is a thrilling denouement where it looks as if all Sam’s plans for the future will go awry!

Themes of love, friendship and family all underpin this story, along with the question of how important honesty is to any relationship. From Sam’s white lies to her boss about her “moonlighting” to Abby’s deliberate withholding of little Jack’s existence from his father, Paul, Della Galton explores deeper issues in a non-judgmental, entertaining way, which makes this book stand out even more than her previous best-sellers.

I hope you all enjoy it as much as I did.

And just to whet your appetite here’s a wee taster of the delights in store for you.

Sam was dreading going into work on Thursday morning. She had spoken briefly to Rex late the previous afternoon once she’d got back from the hospital and recharged her phone. She had begun with an apology. Experience had taught her that if you just put your hands up straight away and said, ‘I’m really sorry, I mucked up, I am totally at fault,’ it usually worked in your favour.

But it probably hadn’t helped that she had caught him just dashing out of the office to an appointment.

He had cut through her apologies, ‘Save it, Sam. I don’t have time to do this now. We can talk tomorrow. I take it there are extenuating circumstances and you didn’t just decide to head for the beach to top up your tan.’

‘As I said, save it for tomorrow. My office, nine o’clock.’

‘I would never just—’

‘Sure.’ She knew when she was beaten. ‘Tomorrow…’

And now it was tomorrow. There hadn’t been time to wash her hair, which was prone to be flyaway, so she’d tugged it back into a stern and efficient-looking ponytail, rather than her normal colourful clips. She was wearing her most sensible, toned-down, stiff-upper-lip office outfit, a white blouse with silver buttons, long black skirt and herringbone jacket. It was a bit warm for the jacket, but she was wearing it anyway. Rex was a fan of the traditional, and although they didn’t meet the public that often in their office, so they could wear what they wanted, she suspected he wasn’t altogether approving of the ultra-casual outfits she occasionally wore in summer.

She could do contrite when the occasion demanded it. She’d even ditched the rainbow earrings Abby had bought for her last birthday in favour of smallish silver hoops. The moment of reckoning had come. She walked nervously across the car park.

Fielding & Son had second-floor offices on an out-of-town industrial estate just outside Swanage. They shared the building with a private dentist on the ground floor – you could occasionally hear the sound of drilling from below – and K. R. Lacey’s Accountancy Services which was on the same floor as them. 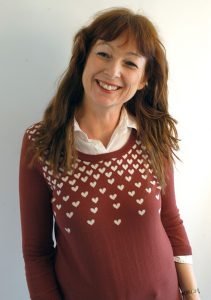 Della Galton is the author of 15 books, including Ice and a Slice. She writes short stories, teaches writing groups and is Agony Aunt for Writers Forum Magazine. She lives in Dorset. Della’s new fiction series launched with Sunshine Over Bluebell Cliff in May 2020.

Many thanks to Boldwood Books, Rachel’s Random Reads and Della for inviting me to be part of this blogtour. You can catch up with the rest by following the links below.