Mothers and Daughters by Erica James 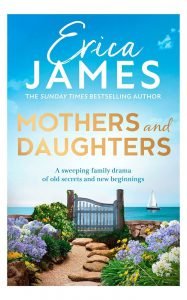 Generational stories are always a winner for me – I love the exploration of family dynamics, and the focus it puts on characters, especially when I can fully empathise with them.

As a daughter and the mother of a grown-up daughter, the title of this new Erica James novel made it particularly appealing to me. What would I learn from the mothers and daughters peopling these pages?

At 63, matriarch of the story, Naomi Miller, is even the same age as me!

Naomi is a widow, settled into a peaceful life and enjoying a fledgling relationship with her next-door neighbour, divorced Ellis.

Her two grown-up daughters, Martha and Willow, should be happy for her. But Martha, in particular, is suspicious of Ellis, and unhappy that he is taking the place of her beloved dad Colin.

She wants her mum to sell up the family home Anchor House, and move nearer to her and husband Tom. She’ll want her mum around when her planned-for baby arrives – though Martha is not actually pregnant yet!

Willow is more tolerant of her mum’s new-found romance. She herself is dating charming new boyfriend Rick. After a lifetime of drifting, is Willow finally ready to settle down? Her mum and sister certainly hope so.

Our three heroines lives are changing, but not always in the way they expect, and never independently of each other’s. For as mothers, daughters and sisters, they must always consider the effects of their plans and actions on each other. Each must constantly question if it is right always to put their own comfort and happiness first.

As a woman the same age as Naomi, it’s she I feel the greatest empathy for, and I must admit that at first I did not take to Martha at all. How dare she assume her mother has no right to her own life, that she is too old to make her own decisions? With Willow, too, she’s a typical bossy older sister.

But as the story unfolds, and the layers peel back, revealing secrets from deep in the family’s past, it becomes easier to empathise with Martha. In the end, all she really wants is for everyone to be happy – she just needs to realise that people have to come to it their own way.

Willow is a very empathetic character, gentle, kind and vulnerable and her relationship with Rick is one of the most interesting aspects of this story. All three women have ghosts they must lay to rest but she’s the one most in need of a strong resolution.

A multi-generational tale, this story doesn’t ignore fathers and sons. The late Colin has his part to play in the ongoing narrative – could he really be as saintly as Martha recalls? Ellis’s relationship with his mother gives the reader insight into his character, as does Rick’s recollection of his own unhappy childhood with his parents.

With descriptive prose, captivating characters and more than one intriguing secret hidden deep in Naomi’s past, Mothers and Daughters is a heartwarming and very satisfying read, that may well make you reflect on your own family relationships.

Mothers and Daughters by Erica James is published by HQ in hardback, RRP £14.99