Posted at 09:08 in Best-selling Author, Historical by Karen Byrom 0 Comments 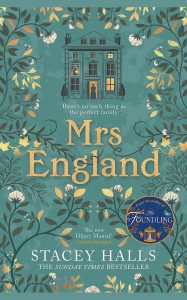 A Norland nanny working in an isolated household high on the Yorkshire moors for a dysfunctional couple and their brood of children – what can possibly go wrong?

It’s 1904 and nurse Ruby May has arrived to look after the affluent Englands’ four children, Saul, Decca, Millie and baby Charley.

The children are a delight and Mr England is affable and welcoming, but it soon becomes clear something is not right in the household.

Why does Mrs England keep to her rooms? Why is local blacksmith Tommy Sheldrake sending her clandestine letters? And what is happening to Ruby’s own correspondence from her family and the Norland Institute?

Friendless, isolated and lonely, Ruby gets on with the day job, but cannot ignore the tensions all around her. Past tragedy in her own life keeps her keenly alert to imminent danger – but as events escalate, can she protect the family she’s responsible for from their own terrible secrets?

With its Gothic feel and the air of mystery surrounding both the England family and Ruby May herself, this was a haunting read.

Undercurrents of tension pervade the pages, the suspenseful narrative amplified by the beautiful but often dangerous setting of the stony crags, rushing rivers and bleak moors surrounding the house, where anything might happen.

The characters are masterfully drawn, all developing at their own pace.

At first, Ruby May seems like a down-to-earth, no-nonsense nurse, but peel away her protective layers, and it becomes clear that she is suffering from some sort of trauma in her past that makes keep a protective shell around herself. And yet, she is susceptible to small kindnesses – and that could prove her downfall.

Mrs England seems like the typical “mad wife” of the Gothic genre, but she is never allowed to become a cliché – she has character and strength, and the capacity for love, if only she can grasp it.

While the story explores a modern-day issue of coercive control, the author never loses sight of the historical context, and the narrative breathes authenticity.

Like Stacey Halls previous books, I read this in one sitting, and loved it from beginning to end.

Mrs England is published by Manilla Press in hardback, RRP £14.99