Not A Happy Family by Shari Lapena

12 Aug Not A Happy Family by Shari Lapena 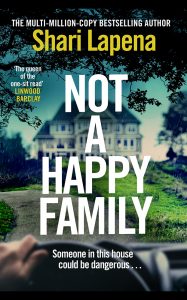 Where there’s a will, there’s a way for a family to gain their inheritance, through fair means or foul!

When elderly couple Fred and Sheila Merton are found brutally murdered in their home in the affluent area of Brecken Hill, near New York, the police first suspect a violent robbery.

But why has Sheila been strangled, while Fred has been stabbed? Where are the murder weapons? Whose bloody footprints lead from Fred’s body to the sink?

Things don’t quite add up.

The last people to see the couple were their three adult children and their partners, at an Easter Sunday dinner, and each one swears they were alive when they left.

But when the police learn that Fred was about to change his will in favour of his sister, Audrey, suspicion falls on each of them, especially as a picture emerges of their difficult relationship with their cruel, controlling, manipulative father.

Their elder daughter Catherine, doesn’t need money, but she wants the family home, which her father has informed her he is about to sell. Their son, Dan, is in dire financial straits, and his father has refused to help him, yet again. Younger daughter Jenna needs her allowance to continue her artistic Bohemian lifestyle – and her father has just told her he is withdrawing it.

The deeply unpleasant Fred may have deserved his death, but the killer needs to be brought to justice.

They’re not the only ones in the frame for murder. Audrey may have lost out on her full inheritance but she still stands to gain one million dollars, as does the Merton’s faithful housekeeper, Irina.

And there’s a fourth, hitherto unknown beneficiary of the will whom the police will have to investigate, too …

In a story told from multiple viewpoints, a narrative of greed, betrayal and fractured family bonds builds swiftly and suspensefully, as the siblings turn on each other.

With such a psychopathic father, it’s not hard to believe that any one of them is capable of murder – especially when you learn about the shocking secret in Fred’s own past.

With so many unrelaiable narrators, telling so many lies, you won’t know who to trust in this twisty, turny tale. But Shari Lapena is a brilliant thriller writer who knows how to engross the reader with multiple red-herrings while never deliberately misleading them, and the denouement, when it comes, is deeply satisfying.

A book to be read in one sitting! Enjoy.