07 Jan Nothing Ventured by Jeffrey Archer 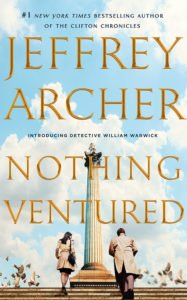 He first appeared in Jeffrey Archer’s series, The Clifton Chronicles and provoked so much reader interest that the author has decided to devote a whole new series of books to him.

And so we meet young William in the early 1980s, when he has defied the wishes of his barrister father Sir Julian to enter the police force as an ordinary PC – although with a degree in art, he could have joined the fast-track graduate scheme.

William learns his policing skills from Fred Yates, a traditional copper, who becomes a father figure to him. After Fred’s untimely and tragic death, William moves from the beat to Scotland Yard, where – contrary to his expectations – his degree comes in handy when he identifies a recovered missing Rembrandt as a fake!

From there he becomes embroiled in a large-scale art fraud masterminded by arch criminal of the art world, Miles Faulkner.

With his colleague Jackie, William begins an investigation that that takes him all over Britain and abroad, where his undercover surveillance work lands him in all sorts of interesting situations.

Is Beth all that she seems?

In the course of his investigations, William meets Beth, an art curator at the Fitzmolean Museum. She’s outwardly as eager to see the Rembrandt returned to its rightful place there as he is – but is Beth all that she seems?

She is definitely hiding secrets from William, and seems less than keen to meet his family, especially his barrister father and sister…

If William doesn’t crack the case and find out what’s going on with Beth, it seems his trajectory from booby on the beat to star of Scotland Yard will be halted before it begins.

Fortunately, William is made of stern stuff – he’s determined to get his man, and his girl.

A Moriarty to William’s Sherlock

A satisfying conclusion to the mystery of the missing Rembrandt brings this story nicely to an end, but Miles Faulkner is a slippery customer. I’m sure he’ll be popping up again in book 2 and subsequent books, a Moriarty to William’s Sherlock Holmes. Let’s hope they don’t end up at the Reichenbach Falls!

Jeffrey Archer is a born storyteller, and I romped through this book, enjoying the contrast between the rarefied upper middle-class atmosphere of William’s home life and the nitty-gritty detective work of his chosen profession.

Easy prose, engaging characters, lively dialogue, romance and a cracking good plot all made this a joy to read – I’m already looking forward to book 2, to see what’s next for William, Jackie and Beth as they pit their wits against more devious criminals.