Off Target by Eve Smith

16 Feb Off Target by Eve Smith 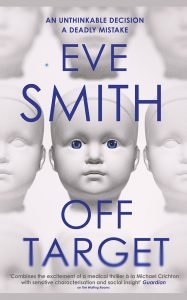 Are we ready for this brave new world?

The invitation to join this blogtour intrigued me as soon as I read the description of the story of a woman tempted down the path of gene engineering to save her unborn child and her marriage.

DNA is such a personal and emotive subject. Though I’ve never been tempted to join any of those DNA sites that trace your ancestry myself. I don’t think there are any skeletons hidden in my genetic closet, but I really don’t want to find out!

Technology is moving on so fast – a sample of genetic material can reveal so much about our past. So it’s not a far stretch to believe that it could also alter our future.

Her heroine, schoolteacher Susan Rawlins has been trying to conceive for years, so when she finally gets that positive pregnancy result, she should be over the moon.

The problem for Susan is that the baby is not her husband Steve’s, but the result of a drunken one-night stand with a fellow teacher.

With genetic tests and profiling part and parcel of prenatal care in this near future, Susan knows she has no way of hiding her betrayal from Steve. Will her longed-for child mean the end of her marriage?

Then her friend Carmel comes up with a daring suggestion – one that will alter the course of Susan and her unborn’s baby life.

Gene editing may be in its infancy, but Susan is willing to take a chance …

Of course there are repercussions, not just for Susan but for all those people who want disease-free babies, brighter babies, prettier babies, stronger babies – because gene editing can go “off target” – with increasingly tragic consequences.

All Susan wanted was a family, but as she and her daughter find themselves caught up in the fallout from scientific experiments gone wrong, can there be any future for them at all?

This story can be enjoyed on so many levels.

An intriguing and well-paced plot quickly draws us in and keeps us turning the pages as Susan deals with her conflicted feelings, wrestling with horrific decisions that turn her into a DNA thief and the potential victim of a blackmailer. The reader is pulled with her every step of the way, with little chance to draw breath. Then there’s a pause, before the second half of the story introduces us to Zurel, her daughter, and the fallout from Susan’s earlier actions.

Then there are the characters. Even Susan can’t condone her own actions, but what an empathetic character she is. Eve Smith’s sympathetic writing shows how easy it would be to take each small step that finally leads Susan down a path of guilt and despair. Husband Steve, friend Carmel, colleague Marty and daughter Zurel are all beautifully fleshed out, too, their flaws and strengths explored as they weave their own way around the story.

I particularly liked the way the author kept it real – yes, dystopian things are happening in the world of genetic profiling and editing but against this background, Susan’s life, with all its joys and struggles are all too familiar – the pain, followed by the joys of Mother’s Days, visits to the cemetery to grieve her own dead mother, boxes full of memorabilia in the attic, drinking wine in her best friend’s kitchen.

The very ordinariness of her life emphasises that the technological advances happening in this brave new world she lives in are the result of individuals’ decisions rather than government led (as is so often the case in dystopian novel). But society’s pressures throw up another interesting question of whether Susan really does have freedom of choice. This is definitely one for the bookclubs to debate.

Actions have consequences, and Susan is very unlucky that the consequences of her actions are so far-reaching.

We should pay heed to her story, because, grounded in the reality of gene therapy, this is a story that could all too easily happen.

And enthralling a fiction story as it makes, I don’t think we’re quite ready for this new brave world in reality. 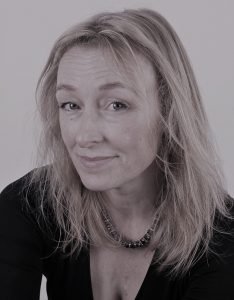 Eve Smith writes speculative fiction – mainly about the things that scare her – which she attributes to a childhood watching Tales of the Unexpected and black-and-white Edgar Allen Poe double bills. Previously COO of an environmental charity, she has an ongoing passion for wild creatures, wild science and far-flung places. 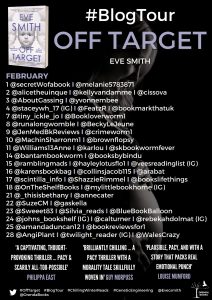 Thanks to Anne Cater of Random Things Tours for inviting me on this blogtour and to Orenda for a copy of the book in exchange for an honest review.