Posted at 09:18 in Christmas, Romance by Karen Byrom 0 Comments 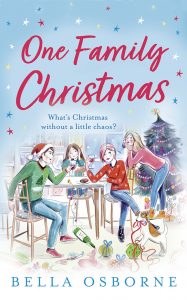 After matriarch Nana Rose’s death, 27-year-old Lottie is determined to host one last Christmas at the family home. But Lottie’s family aren’t the type to settle down with charades and chocolates – they could cause trouble in an empty house!
There’s her mother, Angie, who appears in tow with toyboy Scott, a committed vegan who doesn’t seem to realise that Angie is 10 years older than she claims, and a secret meat-eater to boot! Uncle Daniel and aunt Nicola spend their time sniping at each other, while their 18-year-old son Rhys disappears to his room, only to emerge to hunt for treasure with his new metal detector.
Lottie’s brother Zach, a widower with a little girl, Jessie, also brings a guest – the delightful Emily, whom Lottie immediately warms to. But the girl is obviously troubled by something.
Finally there’s great-uncle Bernard, an eccentric old codger, and his carer Dayea. What will they bring to the festive table?
The scene is set and Lottie is determined to do her best and produce a festive feast in Nana Rose’s tradition, despite the fact that she can’t boil an egg. She’s hampered in her efforts by her crazy cat Duchess and the appearance of a madcap stray dog bent on causing mayhem.
Worse is to follow when the dog’s temporary owner appears – it’s Joe, the man who broke Lottie’s heart when he disappeared from the village nine years ago. Now he’s back as the local vet – and seems keen on rekindling their romance.
But Lottie is determined to play it cool – the heartache she hides is more than just about abandonment, and she’s not yet willing to forgive and forget.
Over the course of the festive week, there are mishaps and misadventures a-plenty in a hilarious narrative that sees a wedding proposal go wrong, a little girl deprived of her toy’s batteries by her sex-mad gran (who needs them for a toy of her own) and a mouse that uses the mulled wine bowl as a Jaccuzzi!
On this level alone, the story would be a fun if somewhat lightweight read. But Bella Osborne is an experienced writer and brings warmth and passion to the page, exploring themes of parenthood, relationship commitment, betrayal and forgiveness that add body and structure to the surface hilarity. It would have been easy to make characters like Angie and Scott caricatures, but they are saved from that by their own self-awareness, though they remain hilarious until the end.
What a family! And what a roller-coaster Christmas ride! You do wonder if Lottie will survive the festive season! However, in the face of her disasters, Lottie remains cheerful and positive – most of the time anyway. If ever a heroine deserved a happy ending it’s her – fingers crossed …

One Family Christmas by Bella Osborne is published by Avon in paperback, RRP £7.99. Also available as an ebook