07 Sep One of the Family by Sadie Pearse

Posted at 12:25 in Domestic Noir by Karen Byrom 0 Comments 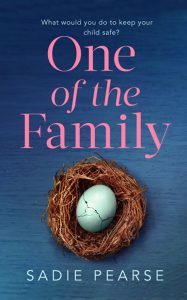 Can one little boy help heal a fractured family?

Freya’s sister Sam has been missing for eighteen long years – a teenage rebel, she walked away from her family at just seventeen years old, never to be seen again. Gradually Freya and her now-widowed mother Jilly have pieced their lives back together – but then she receives an unexpected message. It’s from Sam, and she needs her help! She’s an addict struggling to look after her seven-year-old son Dino – will Freya have the boy while she gets herself clean?

Freya agrees of course, and Dino comes to live with her and her two daughters. But will the disturbed little boy prove a cuckoo in the nest? Should Freya put her sister and her son before her own family’s needs when her own daughter Louise is going through a teenage rebellious phase and her six-year-old Kitty is missing their dad Joe, from whom Freya has separated?

The events of the summer Dino comes to stay draw Freya into a thorough examination of the past, when her sister hung out with an unsuitable group while she watched from the sidelines. But will they help her discover the truth about why her sister has stayed away from the family for so many years?

A plot that revolves around a missing sister isn’t unusual in a thriller book, but One of the Family avoids all the clichés by concentrating on the various characters rather than a sinister plot. We see events from Freya, Sam and Dino’s point of view – and while Dino’s thoughts might seem a little mature for his tender years, he’s a young boy who’s seen and experienced too much of the dark side of life not to be old before his time. No wonder he acts up – but Freya sometimes has to wonder how far his anger will take him.

The plot is slow-moving – things don’t come to a head till quite far on into the story, but Freya, Sam and Dino are so movingly drawn that they held my interest right from the beginning. It almost doesn’t matter what has happened to Sam in the dim and distant past – I wanted to know how they were going to resolve the current situation, and how there could possibly be a happy outcome for poor little Dino, shuttled around different homes all his short life.

This is a compelling read. The challenges the different characters face – from Freya’s separation to Sam’s drug-dependency to Dino’s feelings of abandonment – are very real and thought-provoking and the resolution when it finally comes, is suitably thrilling for a book of this genre, and highly satisfactory.