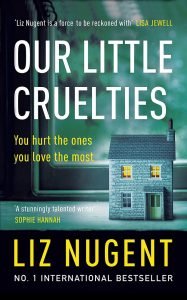 I do like my thrillers to have an extra edge, and Our Little Cruelties is razor sharp, as you’d expect from accomplished writer Liz Nugent. Though the story opens with a mysterious death, unexplained until very near the end of the narrative, it is not so much a thriller as a searing account of the dynamics of a dysfunctional family, exploring the relationship between three brothers very close in age.

Growing up in Ireland in the 1970s and 80s, William, Brian and Luke Drumm are in many ways typical brothers – fighting among themselves, battling for their parents’ attention, vying to be top dog at every opportunity.

Things don’t change when they’re adults. Though William becomes a successful film producer and Luke an unlikely rock star, while Brian gets rich managing Luke’s career, their jealousies, insecurities and rivalry follow them throughout their lives, affecting their love lives, their careers and their families.

Told from each brother’s point of view, the story goes back and forwards in time, to their early childhood with a troubled mother who favours Will, resents Luke and is lukewarm in her affections towards Brian. Will is a typical elder brother, ignoring and bullying his younger siblings; Brian falls naturally into the role of resentful middle child, while troubled Luke gets religion, then turns to drugs and drink to cope with the pressures of fame.

Despite everything, the brothers’ family relationship never fully fractures – but then each is not aware of just how much the others have betrayed him, through a succession of the “little cruelties” of the title.

It’s a situation that will be familiar to most siblings – from the complaint that “he has more peas on his plate than me” to the claim that “mum always loved you more”. Most of us grow out of it, but for these brothers, a rapprochement seems highly unlikely.

But have their differences led to one of them murdering another one? Which brother is dead? And did he die of natural causes?

This is such a good story! It’s absolutely character driven with people that you shouldn’t care for, but do! Will and Brian are so deeply unpleasant, and Luke so weak and damaged, that it’s measure of Liz Nugent’s writing skills that we actually care for these brothers, and for their mother, who inflicted perhaps the biggest cruelties of all. She has damaged her children, yet can be forgiven because she herself has been damaged in so many ways.

The next generation is represented by Will’s daughter Daisy. But can she heal the destructive cycle of the Drumm family or will she bear the legacy of her father’s and uncles’ flawed fraternal feelings.

Secret and mystery make this a suspenseful read, but it’s the brothers’ relationship – so familiar, yet so strange – that drives the reader on through page after page of small and large revelations building up to highly dramatic and very satisfying climax.

After reading what went on in the Drumm family, I don’t think I’ll ever look at my own siblings in the same way again …

Our Little Cruelties is published by Penguin. It’s available now as an ebook, and in paperback on March 20.