Posted at 10:52 in Best-selling Author, Crime by Karen Byrom 0 Comments 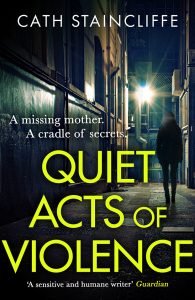 I know when I open a Cath Staincliffe novel to expect a gritty read, and this story certainly pulls no punches right from the opening pages when the tiny body of a baby is found dumped in a bin outside a takeaway.

When a post-mortem report shows the baby has been smothered at just a few days old, the search is on not just for the mother, but for a murderer! Are they one and the same?

Detectives Donna Bell and Jade Bradshaw begin their inquiries in the street where the baby was found. A ruckus the night before, and a break-in a street away ensures that they have leads to follow as they question shop owners and householders. All claim not to know anyone who’s had a baby – but someone, somewhere is lying … just what’s going on behind the respectable facades of the neighbours of Rosa Street?

As Donna and Jade piece together the clues, a dark and disturbing story emerges of poverty, abandonment, hopelessness and modern-day slavery. But still the mother of the baby remains missing – can they track her down before it is too late?

As an unputdownable read, this story delivers on all levels. A murdered baby and missing mother engages the emotions right from the start. The account of police procedure as Donna and Jade race against time to discover the truth is authentic, fascinating and suspenseful. Clues are dropped for the reader to pick up, but the outcome is never certain.

And then there are the detective’s own back stories. On the surface, Donna is a happily married if somewhat frazzled mother of five – but problems at home are escalating, and work provides a welcome escape.

The story, though, really belongs to Jade. A young mixed-race woman brought up in foster care, she’s transcended her roots to become a successful detective. But the shadows of the past are never far away – and when the old demons of the abandonment and abuse she suffered as child emerge, they threaten to engulf and overwhelm her. Can she keep it together long enough to solve the case?

Though I found this story dark, and in many ways disturbing, I would definitely recommend it. Cath Staincliffe is masterful at addressing real-life social issues through the medium of a thrilling plot! And though there can be no happy ending to the story of a baby’s murder, there is light among the shade, resolutions are reached and the readers faith in humanity is tested but ultimately restored.

Cath Staincliffe is the  creator and scriptwriter of Blue Murder, ITV’s hit detective drama starring Caroline Quentin as DCI Janine Lewis and also writes the Scott & Bailey books, based on the much loved ITV1 police series. She also writes stand-alone novels and never shies from addressing the challenging issues of modern-day life.