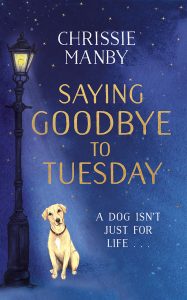 Faithful hound Stupendo is stupendous! Even in the afterlife …

Stupendo may have breathed his last, but this faithful hound isn’t prepared to shake off his mortal coils just yet – especially as he doesn’t even realise he’s passed over.

It takes Caligula, the sarcastic cat next door, to point out to him that it’s time for him to cross the rainbow bridge. Cheered on by a gaggle of neighbourhood creatures that include chattering squirrels, wise old birds and even a wraith-like rat, Stupendo tries but fails.

Obviously, there is something holding him to earth – could it be that his young mistress Tuesday and her baby son William still need him?

As Stupendo ponders what to do next, and the story of his relationship with Tuesday unfolds, we meet a charming young woman who’s been unlucky in love, a dastardly man prepared to take advantage of her, and a surly neighbour who resists all Tuesday’s friendly overtures – even though his guide dog Zena and Stupendo were best of friends.

It’s a tangled situation that Stupendo has left behind – but one that he is determined to sort from beyond the grave!

I’m not usually a fan of stories told from an animal’s point of view, but this is such a charming read. Told exclusively from Stupendo’s viewpoint, the narrative manages to encapsulate all the essence of his dogginess, albeit it anthropomorphically.

But while he’s ascribed human attributes, including the gift of reason and understanding – he’s even hot on grammar! –  he can still be sidetracked by a doggy treat or two, even in the afterlife.

With fun dialogue and a host of likeable characters, both human and animal, the reader is soon caught up in the plot which has all the emotion, suspense and joy you want from a romantic family story, even when its leading character is a dog!

Saying Goodbye To Tuesday by Chrissie Manby is published by Hodder in paperback, RRP £8.99