Posted at 11:05 in Domestic Noir, Thriller by Karen Byrom 0 Comments 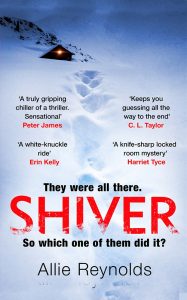 When friendships blow hot … and cold!

Ever performed a 60-40 crippler on a frozen half-pipe halfway up the piste? No me neither, but despite all the snowboarding terminology thrown into the narrative, I was gripped by this story of five snowboarding friends on a reunion trip, 10 years after the disappearance of one of their number on the icy slopes.

With champion snowboarder Saskia’s remains presumably trapped in an icy glacier, the truth of what happened to her may never emerge – especially given the lies told by her friends and rivals.

The story opens with Milla, Brent, Heather, Dale and Curtis (brother of the missing Saskia) arriving at the place where it all happened.

As they enter the deserted ski-lodge, where a pot of stew bubbles merrily on the stove but there are no humans around to welcome them, the radios are disabled and strange messages appear on frosty windows, it occurs to them that they are participants in a deadly game of truth and dare.

But just who is behind it? Has Saskia survived the slopes and returned to exact revenge? Or is one of their own party pulling the strings?

Told exclusively from Milla’s point of view, the narrative alternates chapters between past and present, with tension rising in equal amounts as we begin to understand the rivalries, both on and off the mountainside, of the main players.

The 10-years-ago story is compelling –  descriptive, suspenseful and taut, the sharp narrative presents us with a most dislikeable victim in the shape of Saskia, queen bee of the mountainside, and a bitch to everyone around her. The question becomes not why or even if she was murdered, but why it didn’t happen sooner!

The present-day narrative drags a little around them middle as the friends go round in circles trying to get to the truth. But the promise of them being picked off one-by-one, Agatha-Christie style, is enough to keep you reading.

The plot twists are as tortuous as the cripplers the snowboarders perform – and as potentially devastating, too. This story won’t leave you cold!