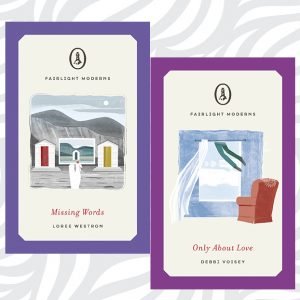 As you’ll all know from my reviews, I’m an eclectic and voracious reader of novels. But sometimes, I just want a quick read, and I’m a great fan of novellas, too.

My favourite novella writer has to be Stephen King, who brought us the brilliant story The Body which was made into the film Stand By Me.

Though it can be hard to find shorter books that satisfy all the requirements of strong plot, sympathetic characters and a satisfying resolution, I’ve recently found two that I really enjoyed, both from the publisher Fairlight whose collection of Modern Novella imprints are widely available.

Only About Love by Debbi Voissey and Missing Words by Loree Westron are both very different stories, yet each has at their heart all the human experience you could wish for.

Only About Love by Debbi Voissey

A study of the life of a man now suffering with severe dementia, Frank’s history is told in a series of snapshots from his own, his wife and his two children’s point of view. With no holds barred, this celebrates the bad and good in his life, and in his character, from his abusive childhood to his long and ultimately successful marriage that has survived money worries and infidelity.

The opening chapter was delivered in a stream of consciousness, not a medium I’m a fan of, but the writing soon settled down into a natural rhythm, and the format of switched viewpoints worked really well.

This is a character study rather than a story with a plot, but ordinary though Frank’s life is, he’s a fascinating and empathetic character.

A short but very satisfying read. 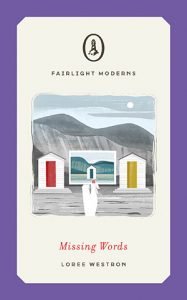 Set in 1984, postal sorting-office worker Jenny picks up a postcard with an incomplete address. It’s from a boy to a girl on the Isle of Wight, begging her to get in touch. Acting on impulse, Jenny decides to track down the girl and spends her days off taking the ferry from Portsmouth to the Isle of Wight, scouring its towns and villages on bikes to find the elusive Deborah.

In her quest to give Deborah a happy-ever-after, Jenny has to address the problems of her own marriage. She and Graham are a couple who have run out of words, bound together, yet torn apart, by the tragic loss of their younger daughter, unable to agree on freedoms for their elder daughter. Is it too late for Jenny to salvage her own long-forgotten wishes and dreams?

With an engaging heroine, descriptive writing, an intriguing plot and an emotional back story, this story had all the elements for a really good read.

Though it could easily have been developed into a full-length novel expanding on the background of Thatcher’s Britain, with all its uncertainties and fears, the heart-rending emotions of family loss, the dissolution of a once-happy marriage, and the suggestion of opportunities missed, as a novella, Missing Words delivers on its promise.

I particularly liked the ending of this one – no spoilers, but I think you’ll be satisfied …